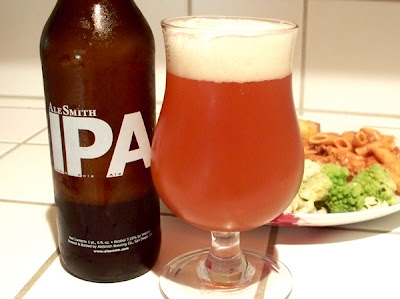 "What's this? Two guest posts in a row? Don't you write your own material any more? Are you just lazy?"

Slow down and relax. Wow, I used to be just like you. Yes, two guest posts in a row, and two awesome ones at that! Don't you worry about what I'm doing, either. I've got big plans for us.

Today's reviewer, Miles Wilhelm, is a fellow beer lover and advocate for the industry. I met Miles on Twitter a while back, and he immediately volunteered when I asked if there was anyone interested in being a guest. A very knowledgeable guy with great taste when it comes to choosing beers. OK. No more talk...

I think that IPA reviews can be a bit tricky. I have had everything from a beer that tasted as if two tiny drops of hop juice were added as a last resort to a beer that came with a spoon so you could eat the hop cones out of the bottle like cereal. An overwhelming hop characteristic can mask errors in the brewing process and can completely dominate your senses, similar to the effect horseradish sauce has. That said, this review was a breeze.

It is definitely refreshing to a beer reviewer when the quaffing of your subject is actually…refreshing itself. I had picked up a 22oz bottle of AleSmith IPA from a place called Imbibe Wine & Spirits in Bakersfield, CA a few months ago. Even just an hour and a half north where I lived it seemed difficult to find any AleSmith bottles unless you have a buddy who makes regular trips to San Diego. I am currently in a state of rediscovery with IPAs (Belgian vs. American) so I thought this might help move it along in one direction or the other.

When I heard Beer Drinker Rob was looking for another guest reviewer, I thought I might contribute by opening up this simply designed yet imposingly labeled acronym of beer history. Now when it comes to a pour, I could care less whether my IPA is opaque or crystal clear. Sediment doesn’t bother me at all. So the orange-red color and two-finger tall head that resulted from my semi-aggressive pour was a beautiful sight in my eyes. The head didn’t stick around too long but that just meant I could charge right in whenever I was ready. First, the aroma. In order of pronouncement: citrus like grapefruit, fresh sawed pine, and just a slight bit of caramel from the malt. Second, the flavor. As expected, at first, and at the temperature I opened it at, the acidic citrus really makes an impact. Not Blind Pig impact, but enough to put this a notch above Union Jack in potency.

The most interesting aspect of this beer, besides the length of time that the lacing sticks around, is how the flavor changes as the beer warms up. It being a bomber and me being only one man, albeit thirsty, it took me a good 45 minutes to drink this down. The last 6-8oz at almost room temp came across as a completely different beer. All bitterness mellowed into the smooth caramel that I had smelled up front. Like a melting piece of butterscotch, I let this swish around in my mouth a lot longer than my dinner guest would have liked. I have dubbed this beer “Two-Face”, for having two distinct personalities, but not one of them unattractive in any way. I have always admired AleSmith for Speedway Stout, and now they rank in my two favorite categories.
Posted by Beer Drinker Rob at 11:53 AM

If you like their IPA check out their YuleSmith which is a seasonal and it's a DIPA in the summer. I reviewed it here. http://breworferment.blogspot.com/2010/08/ale-smith-yule-smith-holiday-ale.html

I enjoy your blog keep up the good work! Maybe a guest blog trade in the future? Let me know!

These beers are not available here in S. Florida, though I have had Speedway Stout and one other at a special tasting, but just an ounce or two.

The one you wrote about sounds great as well, and the head on those pictures, holy wow!

Thanks for the compliment and sure, guest posts are fun. This is two in two days over here!