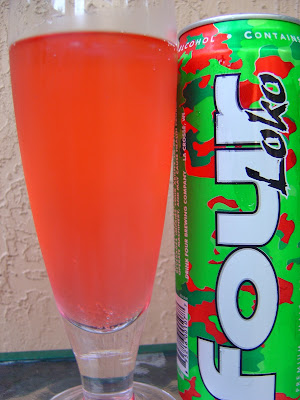 s0 I gOt d0UB1E-DoG-dArED iNT0 rEvIEwINg FOUR LOKO 2nIghT. (I was going to write this whole post like that at the awesome suggestion of the Crazy Cat Lady, but I don't have all night!)  Did you guess the instigator? Yep, Ed Roberts put me up to it. I guess I shouldn't have been surprised after he asked for a Bud Select 55 review. I had never even heard of this stuff until the day he initially threw out the challenge. Then it came up again today as I've been hearing an outcry against this drink and how it's being marketed.

Next step was to figure out where to buy it. Apparently, gas stations are good places, ironically. So I went next door to my office to the Chevron. Yes, wow, you really have been paying attention for a long time. It's the same Chevron where those two girls were murdered last year. Ugh! I was looking around the beverage coolers a little since I had never even seen a can before either.

While I was looking, another dude came in and snagged a Steel Reserve 211 High Gravity Beer. He kinda looked at me to see if I was watching--not sure why. You can see a picture of that beer here if you want. Anyway, I eventually located the Four Loko and had to choose between Lemonade, Watermelon and Punch flavors. I chose watermelon. The cashier said, "Isn't that strong?" To which I replied that I had no idea and that this was for someone else. Hahaha. I lied to her! I paid cash to avoid a trail, and she nicely put my purchase in the obligatory brown can-sized bag and sent me on my way. In that bag, like I was really going to open it at 9 am. On the way out, I saw Steel Reserve guy sipping his, though.

Back in my office, Four Loko was further disguised in a Pei Wei bag I had laying around before putting it in the back of our work fridge. Let's be happy today wasn't a snooping day around there! Or worse, fridge cleaning day!

Just before getting started with this review, I found out that my friend Hannah from KegWorks was doing her own independent review of Four Loko Blue Raspberry. Crazy right? Anyway, I'm getting started with this review now. Not sure if the correct term for this is brewed or not, but Four Loko Watermelon is a "Premium Malt Beverage" made by the Drink Four Brewing Company in La Crosse, Wisconsin. And you thought they only made cheese. Here's a bit of info they put together for you, probably in response to the negative shit-storm they are facing now.

The neon green and red can surprised me with its shocking colors and 23.5 oz size. The can also seems to be bragging about its artificial flavors. Ingredients include guarana, taurine, caffeine and FD&C Red #40. Oh, and as the top of the can repeats over and over, alcohol, 12.0%. Finally, there is a nice little badge that says "WE ID".

Fizzy pour, like a soda. Electric pinkish red color. Very fruity aroma, sweet soda and watermelon. Oh no! This is so sickeningly sweet. It is extremely obvious that the sweetness is there to cover up and mask the huge amount of alcohol that is still there in all its boozy glory. Intense fake Jolly Rancher watermelon candy flavors followed by a horrible drying event. There are no other flavors; there are no redeeming qualities about this drink; it was not enjoyable in the slightest. I dumped it after 4 or 5 ounces. Not undrinkable but it would have been difficult to finish. Therefore, I think it's completely reasonable to assume the only thing this is good for is getting wasted, which I think is utter stupidness. Of course, that is my opinion and I know you guys don't always see mouth to mouth with me! I drank this so you don't need to. Remember that. Oh, and Ed, you owe me three bucks! LOL. 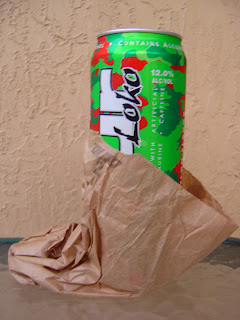 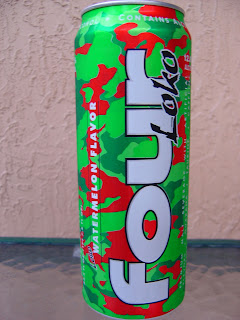 I didn't even know this "stuff" existed until a few days ago...you are a brave, brave man for putting this in your mouth. Definitely created for the newbie college crowd, I would think.

My friends have a running joke they play on each other that is essentially seeing who can bring the worst "malt beverage" to a party. Four Loko Cranberry-Lemon is the worst so far, closely followed by the watermelon.

Funnily enough the best one so far has been Mad Dog 20-20 Orange flavour. Pretty tasty, if you like orange soda ;)

Yes, I was brave so you don't need to be.

Vanessa, that is an awesome game. Cranberry-Lemon? Who the hell came up with that? Doesn't sound good at all.

Thanks for taking one for the team. I think I was talking about this "brew" today with a 23 year old guy at my office.

Is this the stuff that's killing kids? Sounds like you would have been better off brown bagging with the Steel Reserve guy.

How long until this stuff gets yanked from the shelves? You might want to pick one up as a collectors item. It might become the Delorean of beverages.

Yeah, this is the one. I don't know all the stories, but apparently this is being abused.

This is the new Mad Dog 20/20, also with many flavors. That sucked and so does Four Loko.

This drink will soon be off the shelves in Michigan! I read it here. http://www.statenews.com/index.php/article/2010/11/four_loko_alcoholic_energy_drinks_banned
I am trying to get my 21 year old son to pick something better to drink like a nice micro brew.

Hi Kathy. He should be able to find lots of good options and not even look at this.

I didn't know this existed, curious to know how many calories are in it. Did your grandma ever make that super sugary jello from cherry coke? This sounds like it would might make good variation on that.

Yeah, I had never heard of it til a few months ago.

I was looking around yesterday so this is just memory and I don't even remember the source but someone said 660 calories for that can.

They also have two versions depending on state law. One with 12% and one with 6% alcohol.

Hello! oh wow, never heard of it, but would never try it out either. I don't like watermelon flave stuff in general, only the actual fruit. As for energy drinks, I don't drink it, too artificial. At least the ones that are popular here.

Soo do tell: did it color your tongue red as well?

The beginning of the post confused me haha. I blame the time. It's past 2am here now ^_^

Basically, there is this fad drink called Four Loko which is an energy drink with caffeine and other components, yet contains 12% alcohol too, so it's got conflicting ingredients already.

Every time I say "Ed Roberts" that means problems are ready to start. NO no no. Actually, he's the Assistant Manager of our local beer store. But he wanted me to do a review of this "malt beverage" mostly as a joke though.

Being one that can't say no to drugs (I mean jokes), I reviewed this drink.

There are many flavors. One guy I know nicknamed seven of them after the deadly sins: sloth, envy, etc.

I chose watermelon. It sucked.

But the bigger issue with this drink is that many feel it targets underage kids with a hi alcohol caffeinated beverage that is extremely cheap and so sweet to cover all the dangerous alcohol.

Some call it a "black-out" drink and some states have banned it or forced it's manufacturer to cut the alcohol to 6% to meet their laws.

Wow, that was longer than the original review an much boringererererererer. See you in the morning. Sweet dreams!

One word...BLEH! But thank you for going there for us.

Hey bunster. BLEH is the perfect word. This sucked.

I would like to commend you on the great camera work. Love the paper bag seductively sliding off the can shot. You my friend have a future shooting for Victoria's Secret. As for the "beer"...I'm sure its the choice of the "I just turned 21" crowd but not for me. Bless you brave soul.

Hello! It wasn't boring, but so far the longest comment I saw from you haha! Thanks for sharing this though.

With all those conflicting ingredients, I'm amazed that this made it to the store. Isn't there some kind of final approval check by an organization for alcoholic beverages? I mean sure there was a ban and alcohol reduction afterward, but with a cheap, sweet, high alcohol drink, couldn't they sensed trouble from the start?

If I may say I drank an entire can last night for the first time ever not knowing what this shit was and I hate my life right now. Never. Never!

I think right about the time I did this review, Four Loko was under enormous pressure from the FDA and might have even had its products pulled from the shelves because it contained alcohol AND caffeine.

I think they decided to stay in business and kill the caffeine part of it. But I'm willing to bet the flavors are still the same and the high alcohol too.

So yeah, keep on hating!

It's actually not that bad at all. You're just a pussy.

LOL. Yeah, probably. They haven't even sold this version of Four Loko that I reviewed back in 2010 for over 5 years, so it's unlikely you'll really every know. What they sell now is the pussified version that appeases the FDA's fears.

After drinking Budweiser Watermelon Rita's this tastes like medicine!