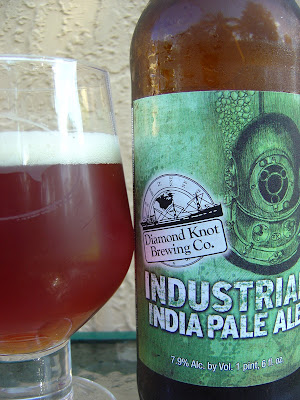 Went grocery shopping this morning. No sooner did I come home than I was being bullied into putting up the Christmas Tree. That was actually fine. But then I had to string my pre-strung-and-lit tree with more lights since this tree has a bunch of sections burned out and I don't know the solution to fixing them. Later, Big Ass Ham will be prepared and eaten. I've had enough Olive Macaroni Garden McDonald's Grill type crap for a while, which is what we ate in the evenings after Disney the last few days.

Today I'm drinking Industrial IPA brewed by Diamond Knot Brewing Company in Mukilteo, Washington. This is the first beer I've had from this brewery. This and three or four others just recently became available at my local Total Wine. The label says these guys have been "fermenting change in taste since 1994". The label also depicts an old-school underwater scuba suit, old cartoon style, interesting.

Since I was looking at this beer right next to one just called IPA, no "Industrial", I asked the brewery via Twitter about the difference. I got this prompt reply (you'll see that the reply is over 140 characters, but don't bother calling me a liar. I combined a few tweets to make it better for your viewing pleasure. Trust me, this is all about you.): "IPA is a traditional NW IPA, hits of grapefruit and ceder imparted by heavy-handed adds of Galena and Columbus hops 40 IBU 6.2% ABV. Industrial IPA is the surly big brother, dark copper, a distinct malty sweetness with an intensely hoppy middle, dry hopped 80 IBU 8.2% ABV."

Malty bread aroma with some spiciness in the background. Sweet and malty and fruity start. Bread and flowers are my first thoughts. Nice orange and caramel flavors are dominant. There are also herbal tea and woody nuances in the background. A weak black pepper spice also dodges in and out. Now I do like a sweet balance to my IPA's and even more to my Double IPA's, but this was too sweet. I expected some kind of kick and bite and bitterness, but this beer was missing those components. A little weak in the carbonation category as well. Dry finish shows just a little bit of the 7.9% alcohol (not sure why Twitter told me 8.2% but I can certainly read 7.9% in front of me now). Industrial IPA certainly was flavorful and it was certainly easy to finish all 22 ounces. I was just hoping for a little more balance the other way, which is a pretty odd DIPA statement. Check it out. 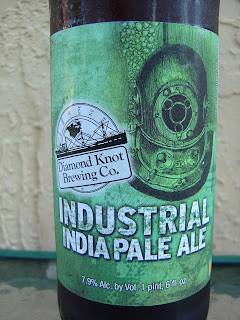