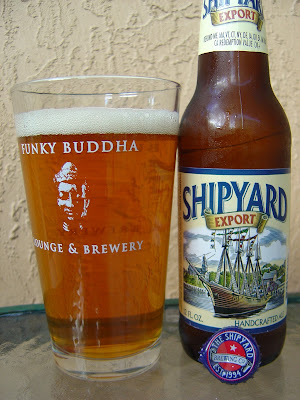 So there's an election today, huh? I voted like three weeks ago, so I had forgotten. I'm betting at around 7:01 we'll be inundated with recaps and projections and "calling it" and... Luckily, I have The Office and Family Guy to retreat to!

Today I stopped by Total Wine as I'm planning a beer trade with the Running Lunatic. Apparently they have some pretty cool beer in Indiana! On the way in, the manager's special table included Shipyard's Pugsley's Imperial Porter with a $3 off special on it, which struck me just nicely. That also helped me decide what to review tonight.

Tonight I'm drinking Shipyard Export Ale brewed by Shipyard Brewing Company in Portland, Maine. I've always been on the blah side of iffy with this brewery until a few gems popped up in a row, both of which are from the same Pugsley series. First the XXXX IPA followed by the Smashed Pumpkin Ale. This one has a very simple label depicting a big ship. Best Enjoyed before June, 2010. Uh oh, Total Wine. I bought this guy within the past two weeks. Anyway, for what it's worth, I don't really give a...

I poured this into my virgin Funky Buddha Lounge Pint Glass that the guys from there gave me at Coffee District Beer Extravaganza. Since then, these guys became a legal brewery and are turning out some incredibly different beers. I cannot wait to get there to try some--alas, Palm Beach County on Election Day is about the last thing anyone on Earth needs!

Malty, with faint fruity apple aroma. Malty sweet flavors start things off, mainly a strange little caramel. That is followed by some bitter hops, just enough to take away some sweetness. Tastes like weird butter mixed with grainy corn and spicy cloves. A little syrupy and thick, low carbonation, not particularly refreshing. OK at best. Glad the one I bought today was a Pugsley series beer! Pass on this one.

How to Win a Local Election, Third Edition 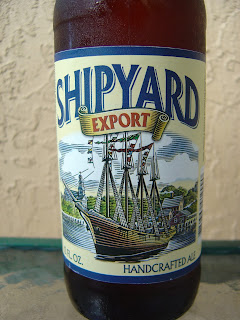