Today I'm drinking Shipyard Imperial Porter brewed by Shipyard Brewing Company in Portland, Maine. This is a member of Pugsley's Signature Series of beers. I've enjoyed all the others from that series immensely. I saw this on the Manager's Specials table at Total Wine a week or so ago with a $3 off sticker on it. Nice. There is no date that I can see on the bottle, except for the one Total Wine applied with their own bar code. 02/23/10 was that date. There is a story on the back which ends telling you to drink this at 55 degrees F. The wife took our camera today, so you'll need to muster some patience as I wont be able to take a few pictures of the bottle until later.

Since I screwed you out of a picture of the beer itself, I will let you know that this son-of-a-bitch is blackity-black-black. Very tiny head disappeared rapidly. Rich milk chocolate aroma with a hint of caramel and other ice cream toppings, luscious. Roasted chocolate flavors kick things off flavor-wise. However, this beer shows itself to be pretty flat and a little thin right from the beginning. Balanced, not too sweet and no harsh bitter. Molasses flavors but no molasses consistency. Some coffee nuances are also present. The 7.1% alcohol was not noticeable at all. Good flavors, though they are a bit muted and not too powerful. The flatness was also a negative. The aroma was great, the flavors were average. I liked this beer but there were some flaws that were tough to overlook. I'd buy something else next time.

Update 11/08/2010, yeah the next day! There are your pictures. If you zoom in you can even see the Total Wine label I ripped off to read the bottle but kept their date intact. 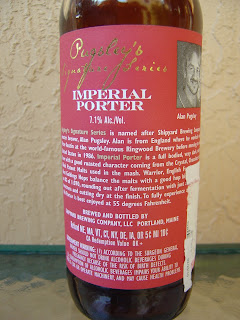 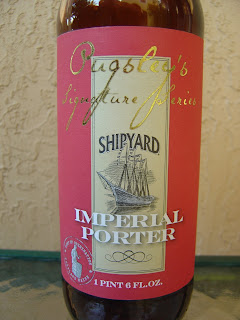