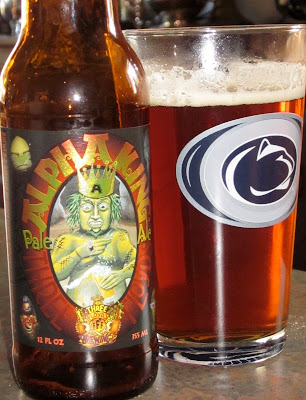 Today's review comes from a place near and dear to my heart--State College, Pennsylvania. If you've never been to this blog, shame on you. Oh, that and I'm sure I've mentioned growing up in central PA near Penn State. There's your connection.

Your guest reviewer today, Paige Deckert, is a Graduate Psychology Student at Penn State, so I'm pretty sure you should be paying attention. I met Paige online not too long ago and hopefully will get myself back to State College to actually meet her in person and share a beer before she gets her PhD! And check out that glass! WE ARE! PENN STATE!

I remember when the only beer I would willingly drink was Coors Light. The first time I tasted Sierra Nevada Pale Ale, I thought it was terrible, bitter, and that I would never drink anything like that. I’ll stick with my gin and tonics, please. Not too long into working at a bar, I realized the importance of knowing exactly how much alcohol is in your beverage, and began exploring more of the taps. It wasn’t too long before I had to venture to bars that weren’t on my college campus to try more exciting brews—macro attempts didn’t suffice, and I was hooked. A week after I turned 21, I had my first Three Floyds Alpha King. Alpha King weighs in at 6.0%, 66 IBUs, with centennial, cascade, and warrior hops. Alpha King (and Three Floyds) changed my beer ideology and consumption, and thus seemed an appropriate guest review.

Poured from a 12oz bottle into a standard pint glass, Alpha King has a nice off-white fluffy head topping the dark amber, but it dissipates rather quickly. The aroma is light and fresh, with a touch of citrus—the hops are apparent, but the malt background is more surprising. There is some lacing, but there are still bubbles on the surface as more is consumed. As an American Pale Ale, the hops are refreshing and complex, and not nearly as floral as some other APAs. There’s just enough carbonation where you can almost feel the hops dancing on your tongue. What I love about Alpha King is that despite the aggressive hopping, it’s backed up by the malt in a way that supports, but doesn’t compete with the hops. There are lingering hop notes, with an earthy sense rather than a bitter one. Overall, it’s a beer that I could sit and drink until I probably fell off the barstool. I mean, not that that ever happens…. What it taught me years ago was: no seriously, beer that tastes like water is not good, and it definitely is not satisfying. When you’re drinking truly good brew, it’s about enjoying the effect that beer has on all of your senses, rather than just inhibiting your neurotransmitters. Seems like an obvious lesson, but hell, I was newly 21. I think I learned it early.

I know that FFF is not available outside of Illinois or Indiana, but if you have the opportunity, you should seek it out. They’re a brewery that cares a lot about the quality of their product, and heck, the labels are awesome. If you’re ever wandering through Pennsylvania, I’m more than willing to share.
Posted by Beer Drinker Rob at 1:15 PM

Hi Paige and thanks for the review!

This one sounds like a keeper. So really the only place to get it is in PA? Is this on Total Wine's radar?

I mean I like your Lion of a review, but going to PA for a beer is a big ask. I've missed a couple of days here, so thanks for bringing me back.

Congrats, you've been ordained by Rob--the highest of honors.

Paige can reply if she wants as well.

This is an Indiana beer. Three Floyds is a smallish brewery and distribution is very limited. I don't know if Ed will ever get this for you down here.

And beer laws are antiquated. You want a new topic to post about? This is it! Beer distribution laws stuck in the 1930's gangster post-prohibition era. I mean, if I can buy furniture on the internet from Chicago, why not a beer? The End.

You can get anything you want in New York, anytime. One morning I called a producer and said I needed a blue Jaguar car on a Manhattan rooftop and I also need to rent a trained animal Jaguar to be sitting on the hood. We're shooting for two hours from 4-6. Done deal.

Shame ya just can't get a case of this or that brew. Oh well.

It's an Indiana brew, indeed. Home is in Illinois, though, and I usually bring back a pretty nice beer haul from visits. So really, wandering through Pennsylvania meant "stopping by my beer cellar" :)

I love Three Floyds brew. I've had the pleasure of Alpha King, Gumballhead and Dreadnaught, and they were all outstanding. It sucks that I can only get them via trades, but at least I've had the opportunity to enjoy them.

Maybe someday I'll make the trip up to Munster for Dark Lord Day!

Same here Dale. Trades or nothing. I've had a few. I heard Dark Lord Day sold out in less than 5 minutes yesterday--you get in on that?

Paige also wrote a review just a few days ago for a Three Floyds Collaboration with Dogfish Head: Poppa Skull, if you missed it.