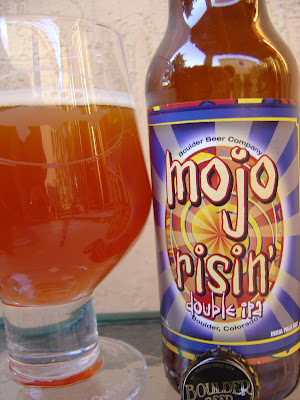 Today I'm drinking Mojo Risin' Double IPA brewed by Boulder Beer Company in Boulder, Colorado. I first reviewed this back in July, 2009--so much for "Limited Edition".

So I have a few unusual comments as part of this review, but I'll share them in story order as I do not want to spoil them for you. Very malty aroma, bread, tropical fruit, definite bubble gum. Sweet fruity start, bread, more bubblegum and syrupy thick consistency. A little alcoholic right from the start as well with its 10% alcohol level. Hints of bitterness try desperately not to drown in an almost sickening sweet start. Some spicy black pepper and a small amount of grapefruit and lemon citrus also flail in agonizing hopelessness. Band aid off flavors mixed with more alcohol come next.

That is when I took a look at the beer that was left, maybe one third of the bottle. What The Fuck is that shit floating in my beer? Reminds me of some science experiment where you are trying to determine whether your dog still has worms, except this ain't on any microscopic scale! This stomach-turning incident forced me to immediately take a picture and dump this shit down the drain. Even my sink was pissed off! Not! My! Mojo! I'll tell you that right now. 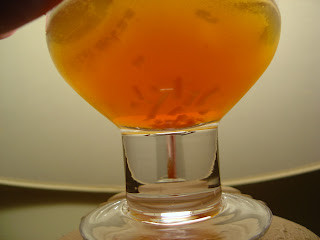 Funniest part--the label quote, "And if you say you never love it, we'll know you are a liar!" This was not going to be a winning beer anyway as the off flavors and syrupy sweetness were not pleasant, but the floating suspension of whatever that nastiness debris is made this an F graded dump beer!

I recently (just a few minutes ago) decided that I'm going to start dedicating each post to a reader/friend/foe/TwitterFollower/celebrity/etc. for a while and see what happens. The first dedication goes to Brewkkake, a fellow beer blogger, local Floridian, and someone I've met in person as well as on Twitter. I paired Brewkkake with this review because I know how much he appreciates brutal honesty. If you don't believe me, go read through his blog and reviews. 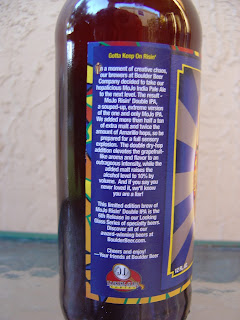 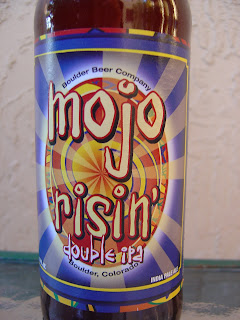 You should contact Fresh Beer or even Boulder about that. I'm sure they would like to know if bottles of their stuff are messed up.

Ew, it looks like maggots! Probably had something to do with the taste being gnarly too.

Oh no, how awful! This usually is a really good beer. What a shame this stuff got out. I have to tell you those with beer wars in mind it wouldn't surprise me if someone sabotaged it at the store you bought if from. They keep leaving rotten chickens on the micro-brews in my store. They also skunk it moving it back and forth from the fridge to the floor.

Mike. Fresh Beer follows me on Twitter and Boulder Beer decided I was unworthy of a follow back. I named their product and their brewery multiple times. If they care, they should have a way of finding my comments like every other brewery.

Marie. Yeah, I'm sure it does. Please don't remind me anymore. It's gagging material. Really.

Bajuna. I'm willing to admit there's a war. But Total Wine certainly didn't sabotage this. They are a liquor store that promotes good beer. Yes, they sell Coors but they also are great for helping out customers that want something good. I've secret shopped that place so much it's not a secret anymore. I get security cam pics of me picking my nose emailed to me! Where are you shopping that those things happen? That's disgusting and why does anyone care that much. A good rinse probably washes that away anyway. You should go undercover with John Stossel, though his mustache is a dead give-away.

i want this in my mouth right now.

Wow, Paige, such a turn on, huh? Really, I think maybe you weren't paying attention. This was not good.

I must say...something had to have happened to your Mojo Risin.. I dont get it. Your pic has chunks in it??

I know over 130 different brews...have even tried my hand at brewing... Dude something went wrong with your bottle.

Mojo Risin is by far one of my favorite beers of all time...(to each his own ) Not everyone enjoys floral and sweet hops...sadly I cannot find it in MA. yet.

Sorry you had a bad experience. Double fermentation often is a sweeter brew.. but "syrupy" is not part of the floral hopped tone in this brew. That alone tells me something went really wrong and I am guessing it had to do with introducing warm and extreme temps to the bottle. The photo is indicative of such action.

I've had this beer before. Was fine. I'm sure something went wrong with this one. However, that's not my fault, and it falls squarely on the brewery.

When I promoted this post, the brewery was named many times. They have made a conscious decision to not pay attention to what I was saying. (Do you know how easy a follow back on Twitter is? How about setting up a Google Alert for the name of your brewery?) If they want to play in social media, they need to pay attention.

Also, the distributor and retailer of this beer certainly saw my post and negative comments, 100% guaranteed, with no input.

Over the course of 800+ reviews, a few other beers have had infection issues, and sometimes the brewery has addressed those with me. Not Boulder Beer. They are welcome any time to offer a rebuttal or explanation.

Thanks for sharing. Very nice blog. Get the viral magical short video app Likee and watch the latestilk21 videos online.