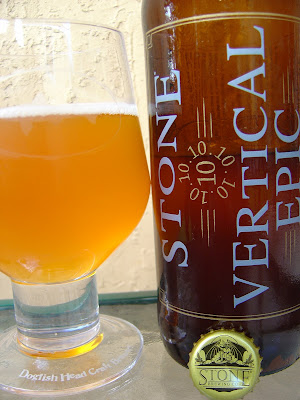 I think my Christmas shopping is done. How about you guys? You are probably not going to believe this, but both Costco and Wal-Mart were pretty great yesterday. I know that I am very easy to get along with, so it was surprising that only two employees, one from each store, earned "dick" status. But in all, I was prepared for much worse. And since I've been known to criticize these retailers, well, they get the praise too, especially for the weekend before Christmas. Funny, looking for that bad day link above, I found another day I went to both stores and had a good experience. Maybe they aren't so evil after all!

Today I'm drinking Stone 10.10.10 Vertical Epic Ale brewed by Stone Brewing Company in San Diego, California. This is the 9th beer in this Vertical Epic Series, an ale brewed with Muscat, Gewurztraminer and Sauvignon Blanc grapes and chamomile. I reviewed 09.09.09 last year if you're interested. There's a long story about plot lines intersecting with great grape harvests. I took pictures so you can read it.

Fruity grape and apple aroma along with sweet honeysuckle. Cider-like, acidic fruity flavor start. That coupled with some sweet sugar and an alcohol burn make for an interesting introduction. Whew! Flowers and grape flavors provide an intense wine-like flavor with strong carbonation being a distinct difference. Sour and spice seem to come into play after you drink a bit of big 22, all accentuated by that same 9.5% alcohol. Yeasty, a little funky, interesting as well and as usual. Fruity tart finish and aftertaste.

Now, this beer was not really very beer-like, although that's not necessarily a bad thing. Everyone has their own definition of beer, and most still think the piss that Bud manufactures is that definition. I'm probably closer to Stone than they are, but these Stone dudes are clearly on their own edge of the spectrum. Did I like this beer? I liked it like I like a glass of nice white wine, but not as much as my favorite beers. Get it? Perhaps that's just because I drank before the date they meant for me to drink it--sometime after 12/12/12!

Dedicated to the Cooking Asshole because of his undying admiration of Stone Brewing. 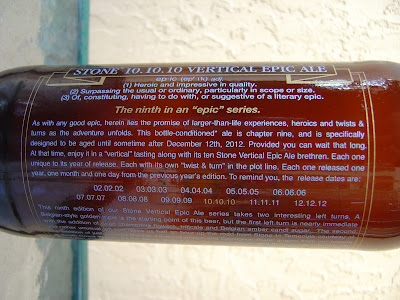 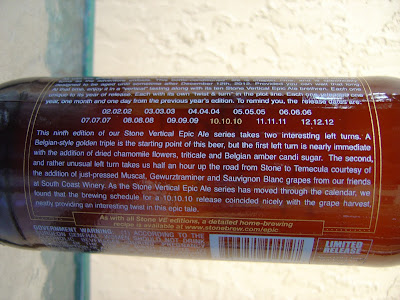 I really enjoyed the 10-10-10, but I had it on tap (maybe it makes a bit of a difference- I'll re-evaluate after opening a bottle).

Overall, the 09-09-09 was my favorite of the series that I have had so far. Can't wait to see how they all are in a couple of years.

It's not that I disliked this beer. I just like others more. I appreciate creativity and know some people will like this a lot.

Too bad we'll all be dead then.

Yeah that is why I drank it now. BTW this is the first time I'm using my new iPhone.

Your review of Stone Vertical Epic 10.10.10 was featured as the Random Review on SixPackTech.com.

Cool, FC. I just read your review. Very interesting and detailed. I also like the pictures at the bottom that spell out the beer name.