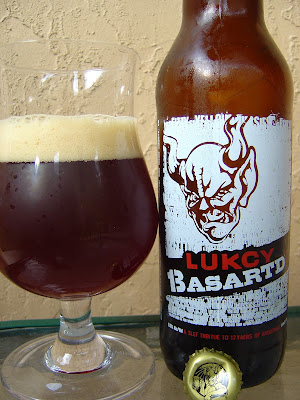 Today I'm drinking Lukcy Basartd Ale brewed by Stone Brewing Company in Escondido, California. Yeah, I know the spelling is incorrect, and I'm going to show you the entire story on the back here in a minute to show you that's just one of the charming things Stone did for this label art. The front depicts a snarling gargoyle and the name of the beer. They used 1 and 3 closely positioned next to each other to cleverly make the B for Basartd, and draw your attention to the 13th Anniversary of the Arrogant Bastard brand of brews. As usual, the label also has its CA Prop 65 Warning on it, stating the detrimental health effects that cadmium can have and that it's used in their label decorations. Hmmm. Didn't some McDonald's glasses get recalled for exactly the same thing?

The story on the back goes as follows, and I'll un-fuck it up for you afterward, as best I can, since every single person I've heard from says they couldn't read the entire story as is. And to make it worse, the story is crooked and goes around a lot of the 22 ounce bottle. I'll take one for the team, I guess.

I'll tell you what. I'm a good typist and that took a long time to type. And my spell checker here in Blogger is about to strangle my ass. Here is the translation so you can more easily read it, at least as best I could understand.


LUCKY BASTARD ALE. Open your mind. Use a crowbar if you must. Since 1997, Arrogant Bastard Ale has demanded that tyrannical mediocrity relax its grip of oppression on our collective consciousness. Few possess the required insight or depth of perception to credit the Liquid Arrogance for instigating the revolution in taste that it has. However, that's perfectly fine, as our Herculean efforts in thrusting the largely unwilling world forward requires no external validation. We realize it's human nature to believe that progress towards greatness is one's own idea.

The mere fact that you're holding this bottle in your hand indicates that you're paying attention, which immediately sets you apart from the masses. It also makes you one Lucky Bastard. However, luck favors the bold...and the arrogant. The triumvirate of Arrogant Bastard Ale, OAKED Arrogant Bastard Ale and Double Bastard Ale are all in play in the cuvee de Bastard you now hold, and while it is indeed a Lucky Bastard, luck had nothing to do with it.

Today, while numerous incredibly distinctive choices are now available, most people still focus their attention upon mass media's incessantly banal echo chamber, keeping their ideas firmly buried in the morass of mediocrity. To break through this cacophony, to grasp enlightenment among the mind-numbing clutter, requires intent. Conscious intent. For many, this active participation in the world in uncomfortable. Preferring instead for others to make their choices for them -- be it a shouting pundit or a television commercial -- sheeple accept the commoditized norm without thought. And to those we say: "Step aside and get the hell out of our way." WWW.LUKCYBASARTD.COM

Translating that shit made me second-guess some of my own spelling and grammatical skilz. I may have not got a few words correct either, so if you see something, let me know. I cannot force myself to proof-read that nonsense one more time. Oh, and if you work for Stone, I'm pretty sure that is the first time you've seen it written in readable fashion as well!

Sweet orange and fruity aroma. There is also a hint of hoppy pine and grapefruit and spice. Flavors start out with a big, bold, spicy black pepper bitterness. Grapefruit and pine and citrus rinds are close on its heels. The pine is resinous texture-wise. Some sweet fruity brings a small amount of relief and balance. There is also quite a bit of oak flavors that remains persistent throughout. There are some herbal flavors intertwined with the orange and other fruits. A hint of heat from the 8.5% alcohol is there, but otherwise it's mainly only an accent for the bitterness and a drying component during the finish. Bitter wins by quite a margin in the end, though there were some nice sweet elements along the way. Guess what? I liked it. Try it if you like what you've read. 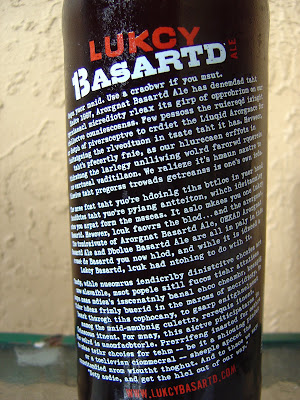 Hey Christina. You're right. I do!

I got the same thing. The thing that threw me was "sheeple" since it was so undiscombobulated.

Nice job, you get some sort of patience award. Maybe more beer?

Thanks, Danger Girl. I found out later that I could have cut and pasted the entire nonsense version from a Stone website, but at least the translation was not in vain.

"sheeple"? yeah, I struggled with that one then decided it was a mixture of "sheep" and "people" which fits the story, so I left it. Hope that was right. :)

Nice. Well done my friend. However, there are two words that were unscrambled in the original text and you took one of those words, which was spelled correctly, and added letters and created a word that was not there.

Yes, sheeple was one of them.

Hey Greg. What's up? Take a look at the picture. "Sheeple" was indeed part of the original message. http://tinyurl.com/4tur5lc

What's the other word? I hate to have incorrect information. LOL.

Thank you for un-fucking the label! Best. Un-fucking job. Ever.

Hey HungryChic. That's just the type of guy I am. :)

Thank you for the translation! Just picked up a bottle for the first time. I typically love reading the Stone stories on their bottles, but this one was making me cross-eyed.

Hey Brian. This was from a while ago, but if I recall correctly, this took a really long time. Then, someone pointed out that the original and translation were on the Stone website. LOLOL.

It may or may not still be there, but at least we have the record here, right?