One of my online friends who just goes by "The Girl" took me up on writing a guest review here. She decided it couldn't be some ordinary beer, and wow, when she told me she'd be reviewing Pliny, I thought that was so cool. The Girl writes her own beer blog, A Girl and Her Beer. You should check it out as the blog is full of interesting stories and information and reviews of beers that are only fiction to me here in Florida. After you check out her site, you should immediately go to Twitter and follow her and "The Boy". You might even go as far as to create a list just for the two of them! These two are so funny, the entire conversation. I imagine them sitting on opposite ends of the couch, tweeting at each other and laughing hysterically. For now, check out her great review of...

So ages ago Rob aka DailyBeerReview.com invited me to do a guest review for his blog.

Now I’ve never done a guest review and was very excited about the idea of exposing his reader base to my style of writing. At the same time though I really wanted to put my best out there! This could be my one shot and I had to figure out how to get all the aspects of me into the one review. I mean how can I sum up my wit, good looks, beer love, and pick on my boyfriend (aka The Boy) in just one post?!

I envisioned several write ups. The first one was about how women prepare themselves for war in cute dresses and war paint (I.E. makeup) and how the beer blogger does the same only with photographs, words and beer. That was appealing in its own way, any time I get to discuss war paint and beer in the same write up I’m happy. But it wasn’t quite right.

The second version revolved around the only negative comment I’ve received which was “I love you... and the concept of you... but your posts leave me flat.” To which, after some careful twitter consultation I responded “Thanks for the love give me a moment to get the defibrillators and we'll see what we can do about the flat...CLEAR!!!”

While entertaining ultimately I didn’t really want to write a review that was centered on negative commentary directed at yours truly (that’d be me!).

No, I needed an edge that Rob couldn’t get so when he said that he’d never had Pliny the Elder by Russian River Brewing (www.russianriverbrewing.com), or even seen an empty bottle I knew I was set. There really should be a soundtrack played every time someone mentions Pliny, as the beer has that much of a reputation! 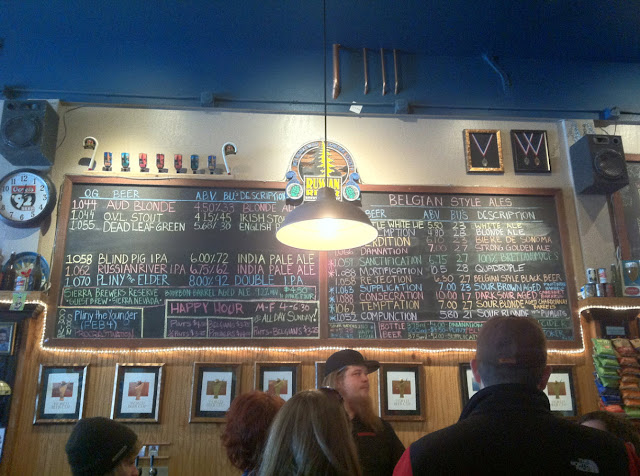 “In 1997, Russian River Brewing Company (RRBC) was founded by Korbel Champagne Cellars in Guerneville, California. Vinnie Cilurzo was hired as the Brewmaster. At the Great American Beer Festival in 1999, RRBC and Vinnie were awarded "Small Brewing Company of the Year" and "Small Brewing Company Brewmaster of the Year." In 2002, Korbel decided to leave the beer business and sold the brewery to Vinnie and his wife, Natalie. The brewery is now located in Santa Rosa, California” – From www.russianriverbrewing.com

And a little educational piece on who Pliny the Elder was:

“Pliny the Elder was a Roman naturalist, scholar, historian, traveler, officer, and writer. Although not considered his most important work, Pliny and his contemporaries created the botanical name for hops, "Lupus salictarius", meaning wolf among scrubs." – From www.russianriverbrewing.com 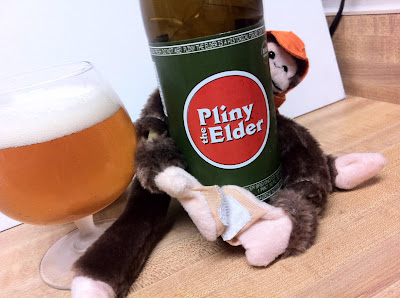 For those not in the know, Pliny the Elder is one of the holy grails of beer, which probably makes it a little insane that I can buy it at my grocery store for around five bucks. Whenever possible I like to pull stats from the website rather than other internet sources, however the website didn’t have them. So I emailed Russian River asking for the malt and hops used to create one of the (arguably) best IPA’s in the world.

Advising my boyfriend of this he said “You know they won’t respond right.” To which a defeated girl (me) just grumbled. Then I got this response:


“Thanks for the email, here is the information you requested:
Malt: 2-row malt, carapils malt, crystal malt
Hops: CTZ, Simcoe, Centennial, Amarillo, Cascade
Take care,
Vinnie
Vinnie Cilurzo
Brewer / Owner
Russian River Brewing Company”
So not only did I get to point and laugh at my boyfriend but we got our stats straight from the brewer/owner’s mouth…well…email. To round out the stats Pliny the Elder has 92 IBU’s and an 8.0% abv.

Considered one of the top beers in the states (and quite possibly the world) this double IPA pours a nice hazy, almost glowing, amber color with just over a finger of creamy pristine white head.

The smell is dry with pine, grapefruit citrus and floral hops with an elusive bit of honey sweetness in it.

The taste is pine hops initially before giving way to ripe fruits (pineapple, orange) and finally settling on grapefruit and florals. The bit of sweetness in the nose is even more elusive in the taste, I found myself hunting for it with each sip and coming up empty.

One of the most impressive (or least impressive depending on which Pliny Camp you belong to) things about this beer is for such strong hop character, it isn’t bittering or abusive to the palate. It is surprisingly drinkable and non-abrasive for a double IPA.

Is this one of the best beers in the world? Beer Advocate placed it in the number two spot of the top 100 beers on the planet. But ultimately beer is all about the taster. I love love love IPA’s. I don’t think Pliny would make number 2 on my list…but I haven’t tasted all the beers in the world (give me time!)

Still as far as double IPA’s go, Pliny is a damn good one. I even made a trip in the middle of writing this review to the brewery itself to try it on tap, just to make sure the Elder is just as delicious on tap. It is. 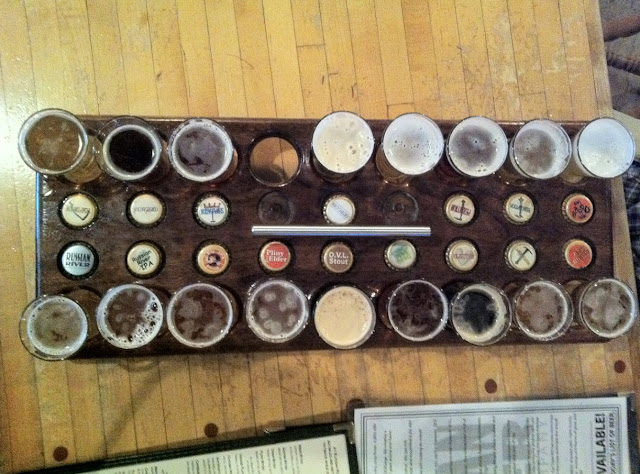 I had a lot of fun doing this, can't wait to see what you think about the Pliny, oh yeah, that deal is still on.

Wow, weird - I just told someone I'd kill for a Pliny the Younger. Or an Elder, really. I'm pretty jealous of anyone who can get their hands on this.

Hey "The Girl". Thanks for spending the time doing this and for the fabulous beer choice. Great photos too. One question. Does "The Boy" give his 27-ish year old girlfriend shit for playing with toy monkeys?

Marie. By The Girl's comment above about "the deal being on"... that means she's going to send me a bottle. How awesome is that? It's funny that she said it's not even that expensive. I mean that local Panic Attack 12 ouncer I sent you was $3 and you get a Pliny for $5? Something is fishy!

Very nice review by "The Girl". I'm getting a pint tonight.

Wish I could join you. I've never had it before.