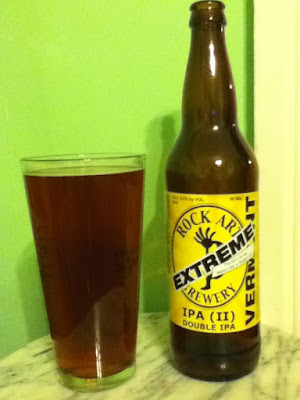 I was talking to this guy over on time-waster Twitter the other day. I think the subject was how almost all of the beers from Sam Adams have the same distinct flavor. Anyway, one thing led to another and the next thing you know I have a new guest here! Chad is half of the Beerlyweds team; he and his wife enjoy reviewing beers together. He wrote a short bio below as well. Thanks, Chad, for taking the time.

Finally, I must congratulate Rock Art for the wonderful grammar they put on their label and website: "Whether it’s 90 degrees out or your knee deep in pow pow....." Hahaha.

Rock Art Double IPA is an 8% ABV, 90IBU offering from the Green Mountain State. Part of the “EXTREME” series of Beer, the Bottle with the Bright Yellow Label has the “This Ain’t for no Mama’s Boy or Daddy’s Girl” Catch Phrase. The Label has a small write up which includes some ideas for Food Pairings.

Normally I’d be reviewing this Brew from the @Beerlyweds but Wifey cringed at the thought of a Double IPA. No complaints here, Flying solo means more Hoppy Goodness for Me. Lets Dive right in.

The Beer Poured with a Thin White Head, This could have been due to me not pouring with enough Vigor as there are Visible bubbles, Carbonation is definitely present. The Beer has a Deep Copper Color, almost red. It is clear, unlike a lot of Doubles that have a very Visible Hop Haze.

I find the Nose to be very fresh. There is a nice Piney Hops Scent, with Just a hint of Citrus and malt. Very Effervescent, I was able to smell the hops before I even picked up the Glass.

The Taste is Clean up front with a rush of aggressive Bitter. As the bitter settles down a slightly citrus flavor appears but is almost an after thought. The hops have a Piney, Grassy flavor, I Find that the flavor is similar to a Wet Hop Ale, with a very Fresh flavor.

Such a Rich colored beer led me to expect more of a Malt presence, it’s definitely in there adding to the Balance of Flavors but is Subtle compared to the Hops.

This Beer is very crisp and clean, it has a pleasant Mouthfeel. There is no Sticky or Oily residue left behind. The Bitterness Lingers on your Tongue, almost a slightly numbing sensation. It’s enjoyable though and not Overwhelming or Tiring like some of the Bigger Hop Monsters out there.

Overall I would suggest this to anyone who enjoys a Strong Hops Bitter but in an Easy Drinking way. I think it lives up the Double IPA title but might fall slightly short of the “EXTREME” emblazoned on its label. The side of the Bottle reads “Whether it’s 90 Degrees out or your knee deep in Pow Pow….” I agree 100% with that statement, Hot Day or Cold snowy Maine Evening, This beer from Vermont is Just Right.


My name’s Chad I’m a 28 year old Vermonter transplanted to Maine. Husband and Father I’m usually reviewing with my Wife Jessica as the Beerlyweds. I am a fan of all Beer and constantly trying to find new Brews to try, although I tend to Favor Big IPA’s and anything Imperial.
Posted by Beer Drinker Rob at 10:47 AM