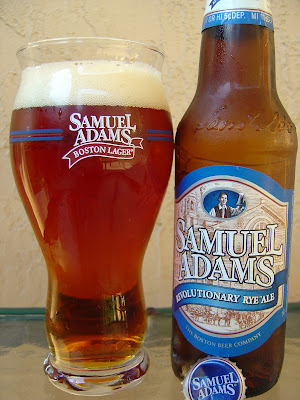 First, don't say that I didn't warn you about a string of Samuel Adams reviews coinciding with the purchase of two different mixed 12 packs. So far, this is only the second day in a row, but get ready. The solution to that happening is for one or more of you to step up and write a guest review. It's not really that hard. Until then, let me start by telling you about a bottle of Sam Adams that most of you probably haven't had yet.

Today I'm drinking Samuel Adams Revolutionary Rye Ale brewed by The Boston Beer Company in Boston, Massachusetts and a few other locations. This beer was the winner of the 2010 Beer Lover's Choice Contest, from which you may recall that I reviewed both entrants back in August. There were only two choices put to the public for a final vote, so this being the winner was not likely Jim Koch taking my advice exclusively. (But I am available if needed.) Best by May (2011). From what I could tell, you can only get this beer by sucking it up and buying one of the Sam Adams mixed 12 packs, but at least it's not the one with their Winter Lager, and it also includes Noble Pils.

Not a very powerful aroma, but rye and peppery spice are there. Sweet flavor start, with an herbal tea quality. Right away I am feeling the thinness of this beer. Not what I remembered. Next up are some distinct rye flavors, but any peppery spice that went along with them ran away long before bottling--barely a spicy nudge--very faint. Bread dough and orange flavors also add some other dimensions, but still, this doesn't have enough body and is approaching watery. Carbonation is too low as well. I was so looking forward to a little prickly spicy black pepper carbonation action, but alas, I was rejected again tonight. Not exactly my recollection from the sample I had (and the sample was an entire bottle, not just a capful). I'd hate to think they dumbed down the contest winner because they thought it would appeal to the masses, but I wont lie. It has crossed my mind. Not bad flavors but missing a lot. Just an OK beer. Tell me where I'm going wrong.

The Ultimate Beer Lovers Cookbook: More Than 400 Recipes That All Use Beer

Fred and Friends Hopside Down Glass

It looks so damn delicious!

I'm glad you reviewed this beer because I was going to suck it up and by one the mixed 12 packs just to try it. Sad to hear that this beer is lacking in so many ways but you just saved me $20. Thanks!

Looks good and it's not bad. Just had higher hopes considering I took the taste test.

$20? Wow, that mixed 12 is $14 here at Total Wine. It does include the awesome Boston Lager and awesome Noble Pils too. The other 3, Scotch Ale and 2 I can't remember right now, I don't remember how they stack up. It's been a while. This mixed pack is way better than the Winter one, I think.

I had this over the weekend and thought it was delicious. Got it in a mix pack, American Originals, best by June 2011 date. Also included Lager, Scotch Ale, White Ale, Noble Pils, and Irish Red. Had it for dinner tonight with a rosemary rubbed, roasted pork tenderloin and it complimented it well.

Hi Anonymous. Yeah, I got mine in the same mixed pack. I wont say that I didn't enjoy it, but it seemed lacking something. I had the unique perspective of trying the contest sample as a comparison several months ago. Glad you liked it!