When I was over in the foreign aisle at Total Wine the other day, I came across the beer I will be drinking today. Schneider & Brooklyner Hopfen Weisse brewed by Private Weissbierbrauerei G. Schneider & Sohn GMBH in Kelheim, Bavaria, Germany. Now that's why I love the German language! Oh, and good freakin' luck if you click to that website.

As the story on the back of the bottle states, this beer is the other half of the collaboration between Schneider's Hans-Peter Drexler and Brooklyn Brewery's Garrett Oliver. I had the first half almost a year ago while I was reminiscing about young love, and I probably should have looked for this one sooner. The code on the label has no understandable "drink by" information, just 10.165 3 0848 2717 as a code. May as well be in German!

This bottle is 16.9 ounces large and there is a shitload of sediment on the bottom. Personally I think it's time Schneider takes a look at its presentation. The long slender bottle has an extremely blah blue and yellow most boringest label I've ever seen. It is, however, the beer that counts. Here we go with a "hoppy, zesty and supremely refreshing, delicious blend of Bavarian craftsmanship and American ingenuity". The stories from each version really echo each other.

Wheat, banana and spicy aroma--yummy and classic. Tons of wheat and tons of banana flavors hit you right from the beginning. Spicy cloves and coriander are also very noticeable. With each sip, light lemon and yeasty sour build and build to another serious flavor contender. The beginning flavors were a little sweet, but those are smoothed by some slow jams... er... I mean, by the 8.2% alcohol and a bit of hoppy bitterness. The alcohol also provides some warmth by the end without getting in the way of the flavors. Strong carbonation. Terrific flavors! I don't remember the alcohol being such a factor in the Brooklyn version though that could be mostly just a bad memory, but it's a little burny by the endy. Great beer. Try it if it's still lingering around.

Daytrips Germany: 60 One Day Adventures by Rail or by Car in Bavaria, the Rhineland, the North and the East 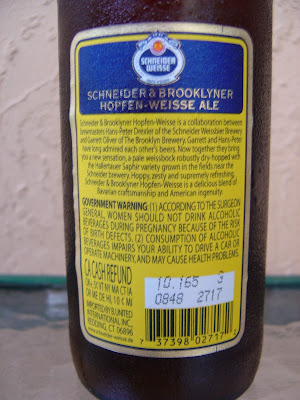 I actually prefer this beer to the Brooklyner-Schneider Hopfen Weisse. I talked to Garrett Oliver about this and the sister beer, they are actually identical beers with the only difference being the hops. For the Brooklyn-Schneider Hans-Peter choose the Hops (amarillo and palisades if I remember correctly) and Garrett Oliver choose the hops for the Schneider-Brooklyner

Here are my thoughts on the two brews: http://www.simplybeer.com/blog/2009/07/30/brooklyn-schneider-hopfen-weisse-vs-the-schnieder-brooklyn-hopfen-weisse/

Hey Peter. Thanks for the information. I really liked both of them. Let me go check out your thoughts.