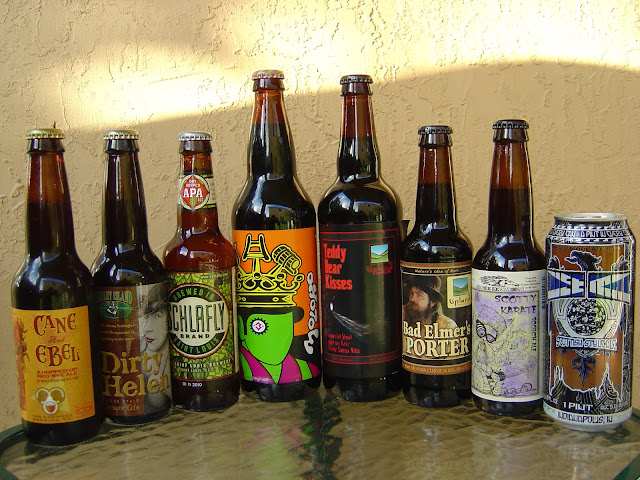 Today I'm drinking Cane & Ebel, a "hopped-up red rye ale" brewed by Two Brothers Brewing Company in Warrenville, Illinois. This little guy arrived in a basket on my doorstep today. Someone rang the doorbell, then took off and left him an orphan. Such a sad story that he and his 7 brothers and sisters were left in my care. OK, who am I kidding? My doorbell hasn't worked for over a year! Seriously though, this is beer one from trade two with Marathon Marie (NSFW). Here is the other half of the trade. What do you think?

This is the second beer I've had from this brewery after their 2009 Bare Tree Barley Wine Style Weiss Beer, which was fantastic. The label says Artisan Bottling, Worth a Whack, which I guess is referring to the label itself. There is a guy that may be Cane or Ebel cutting crops in the field on one side. On the other is what looks at first glance like a monkey head, but when you look more closely, it's just two people sharing a glass of beer. I know, wild imagination! 68 IBUs (850 Maries). 7.0% alcohol. And the kicker, Best By 6/19/08. The last eight is half missing but there are no other numbers that start with a backwards 3--it's 08 (see picture below if you'd like to confirm)! Doesn't bother me in the slightest; actually makes it more fun.

Sweet rich caramel aroma, a little spicy and if you dig deep, you may find some rye. Very nice rich caramel flavors start things off as well. Dark fruits and raisins are not far behind. Sweet start. However, hoppy and spicy come in behind that sweetness and persist with a continuous underlying bitter balance. Hints of vanilla and a small amount of rye are lingering as well, but not too noticeable. There is a little lemony sourness toward the end which progresses right into the aftertaste. The alcohol is mostly masked though it does provide a little bit of warmth. Soapy consistency, low-to-almost-no carbonation. Decent beer. I'm guessing the age may have taken a little hoppy spicy bubbly carbonation kick out of this one. Not sure where the rye was, though. I'm also not sure if Two Brothers still brews this beer or not, but I would certainly try a fresh one to compare if it were available to me. Glad to have tasted this one!

Bloodlust: On the Roots of Violence from Cain and Abel to the Present

Walking cane - BUBBA STIK Texas style walking stick made of Stained Tennessee Hardwood and topped with a brass Hame handle from a real horse collar harness. Made in Texas by real Texans. 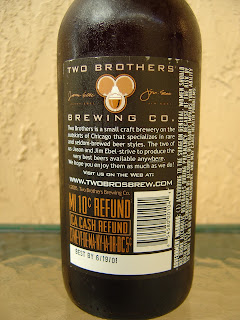 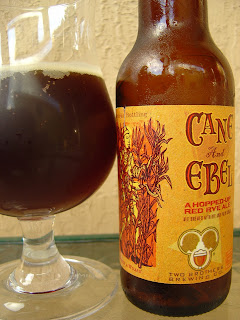 Posted by Beer Drinker Rob at 9:40 AM

HAA. That is so typical of me. I wish I'd checked the dates on the other two 2Bros I had. And this was even the beer store on the "nice" side of town so you'd think they wouldn't have three-year-old beers still sitting around. Although don't rich people only drink cognac or something?

Yes, I do believe you hit the beer section of the liquor store where only Sauternes, Champagne and Hennessy are purchased. You should go back there and look for beers that are old but may have aged better.

I rarely think to check the dates. Kinda funny here. Anyhow I really like this beer fresh..never had a aged one and think if you had a fresh one your review might be a bit diff.

I think you are totally right. I'm pretty sure the unintended aging took a little out of this beer. A bunch of people told me the same thing about it being great fresh.

But it was still OK three years after being brewed.