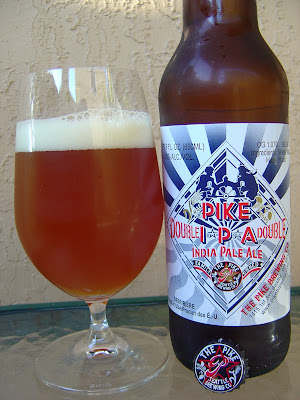 I just got back from Total Wine where the famous Ed Roberts plied me with shots of Tequila, Vodka and Scotch (including a $120 version) until I caved in and spent $175 on booze. I didn't even get a discount for the $100 plus in beer Ed and I sold this guy from Montreal who just opened his own microbrewery. (Ed got a French lesson, too.) But seriously, I was on the clock.

Fresh Beer had a Shiner and a Magic Hat sampler tasting too. I'm not really much on Magic Hat though; couldn't force myself to buy a six pack even to receive a shirt and other goodies. Anyway, the wife's 40th birthday bash is going to be fun!

So today I decided to drink Pike Double IPA brewed by Pike Brewing Company in Seattle, Washington. You might recall the tasting we did of all of Pike's beers as they were introduced to South Florida last July. Big 22 has a thumbnail of two people sharing a pint of beer while steering a ship's wheel. Hmmm, Exxon Valdez ring any bells? Very boring label otherwise. 80 IBUs. There is a stamp on the label too, says 21B.

Citrus and fruity orange aroma, a bit tropical and sweet. The flavors, however, will have none of that sweetness. Bitter up front with some fruity and malty backing. Plenty of citrus, pine and very dry keep the flavors toward the bitter. There isn't really any over the top aggressive bitterness and no spiciness to speak of; rather this beer is relatively balanced. Nice carbonation, pretty good. Straight-forward, flavorful and a good price. My favorite of the Pike beers I've tasted! The 8% alcohol is noticeable throughout, doing a lot of drying right through to the end. The End.

Absolut: Biography of a Bottle

Posted by Beer Drinker Rob at 9:54 AM