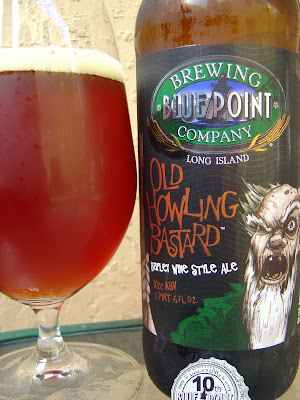 First, let me say the label art is awesome, done by Steven Castro at AtomikArt.com. I'm pretty interested in brewery art and wish more breweries would promote their artists. For example, if you haven't heard me mention the seasonal prints Marq Spusta did for Dogfish Head last year, you are a new reader. I even inquired recently with Flying Dog about Ralph Steadman pieces. You know, all the crazy dog art? This was the awesome response I got from Flying Dog's Public Relations department:

I'm going to be brutally honest with you: We have original Ralph Steadman pieces here at the brewery, but we wouldn't sell them even at gunpoint. That's how much we love that sick, twisted, and brilliant troll of an Englishman.

Anyhow, somewhere along the way here I got distracted. Old Howling Bastard is named for a local character, though that's where they stop with the story, except to say you may become this person after a few glasses of this beer. Ah, a legend! Big 22 comes with 1.097 OG, 60 IBUs and 10% alcohol and is available from Thanksgiving until they run out. Finally an honest limited release statement!

One more thing before I tell you about the beer I already finished. We were chatting over on time-waster Twitter about breweries that take a moment or two to speak with those talking to or about them. Blue Point was one of the ones mentioned. Check out this response...

@dailybeerreview @Ed_Roberts It's all about engagement! Doesn't hurt that beer is the lubricant of social intercourse... Cheers!

Sweet caramel aroma, spicy too. It smells sweet but for some reason you are expecting some bite on your palate in the near future. Sweet sugary candy, bubble gum and caramel flavors hit you right in the beginning. There is definitely some warmth from the 10% alcohol, but it's not hot or burning or sharp. Rather dangerous. Prickly spicy black pepper takes some of the sweet edge off. The smoothness, however, remains. Pine and wood are also flavor players. Old Howling Bastard seems a little under-carbonated and on the thinner side, but neither to an unacceptable level. Dry finish with lots of booze to spare there. Overall, I thought this was a little too sweet, especially after the big bottle, but this was a solid beer. Flavors are nice and you should check it out! 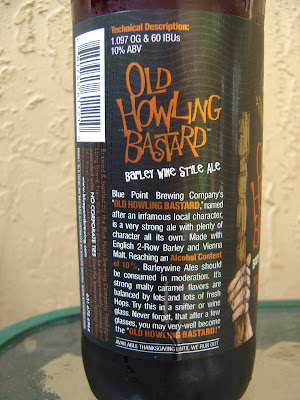