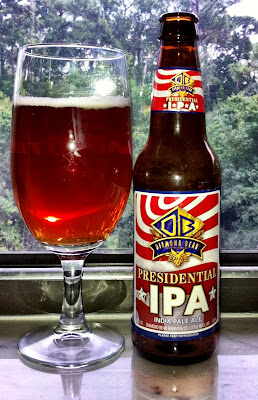 Yep! Ed Roberts came back for the second day in a row, this time bringing two more beers from his Diamond Bear Series. To answer your first-paragraph question, Ed, yes, there are many times a few beers were presented in the same review: head to head, different vintage, bottle v. can, one was so bad I had to put up another, and most notably, all of those Beer Tasting Extravaganzas that you organized! Thanks again!
Diamond Bear Presidential IPA and Two Term Double IPA
I bet you already read my first Diamond Bear review of their Paradise Porter. If you didn’t, click here.
Today’s review was supposed to be the finale of my Diamond Bear series, a side by side comparison of a fresh Two Term Double Imperial Pale Ale and one aged for about one year. Life often throws you a curve ball and in this case, I got a beer review version of a curve ball. I sat down with my bottles and a realized I had a fresh Presidential IPA (pictured) and an unlabeled year old Two Term DIPA (no picture). Oh well. I decided to continue with my planned tasting. I wonder if this going to be the first time two beers are reviewed in the same post on dailybeerreview.com?
Presidential IPA
This one pours a clear auburn red with not much head. It has a light but attractive nose with definite grapefruit presence and malt sweetness. Big juicy grapefruit and sharp hop bitterness on the palate. The malt I thought I was picking up on the nose is barely present when tasting it. There are really bready notes more than a malt presence. Not sure what hops are used but they are fairly earthy. The carbonation is a bit on the light side and the body is a bit thin. According to the Beer Advocate website, the ABV is 7.37%, which is hard to believe. I was going to guess less then 6%. Solid, but unspectacular. If this was my local IPA option, I would be drinking it. In the sea of good hoppy options available in a lot of places I am afraid this would get lost in the shuffle.

Two Term DIPA (aged one year)
According to the brewery this beer is probably at its peak or just past its peak. It will be poured fresh at SAVOR, which I will be attending in June. I look forward to trying it there. I normally drink DIPA’s as fresh as possible.
This also pours a clear auburn red. In comparison to the Presidential IPA, this one has a good amount of head and lacing. It has a stronger nose than their IPA. There is a strong malt and pine nose. No grapefruit picked up here. I get some honey maybe? The ABV here is 8.5% ABV. There is a bigger body and carbonation than the Presidential IPA. This beer is drinking nicely. The balance in this beer is starting to tilt towards the malt characteristics. Nice long lingering finish with a fun interplay between the hop bitterness and the malt sweetness. I’m digging it. This is not a session beer but it is on the lighter side for a DIPA. From the few Diamond Bear beers I’ve had now, I would say it appears good balance and drinkability are goals of the brew master. I think Diamond Bear is representing Arkansas well and if I make it there in my travels I will definitely check out their brewery and more of their beers.
Posted by Beer Drinker Rob at 10:27 AM