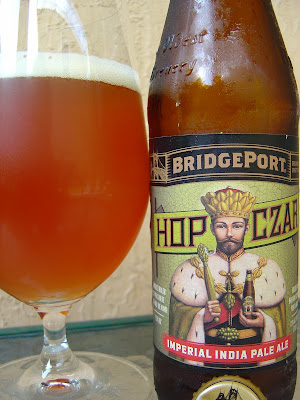 Today I'm drinking Hop Czar brewed by Bridgeport Brewing Company in Portland, Oregon. Except for the imprint in the glass stating that Bridgeport is Oregon's Oldest Craft Brewery, most of the label is dedicated to the Czar theme. Let's start with the actual czar drinking his own beer and holding his hop topped scepter. "A ROBUST RULER OF IPA IS HERE. ALL HAIL THE KING!"

The back label story goes on to brag about using "an irresponsible amount of hops" and the neck label says "this robust golden monarch requires a king's ransom of hops." Finally, the brewery's tagline: Reach Beervana. 7.5% alcohol; 87 IBU; stamped on the neck is 02612. Is that February 6, 2012 as an expiration date? If so, I'm not sure skipping the zero before the six was really worth saving the ink. Perhaps it's the 26th day of 2012? Hmmm.

Quite the malty bread aroma with an underlying fruity orange citrus. Much more bitter flavors to start than the aroma suggested. Lots of pine and huge lemon bite and astringency. Some orange citrus accents contribute as well before some lightly sweeter fruits and bread flavors come in and watch three strikes down the middle in a failed attempt to even the score. Not even a swing! Bitter is as bitter does to the bitter end. Carbonation solid, body is medium and sticky. A bit of spice shows up just as the dry finish ends things. The finish has just the faintest medicinal flavor but it's not too bad. Good beer all around. For sure check it out. 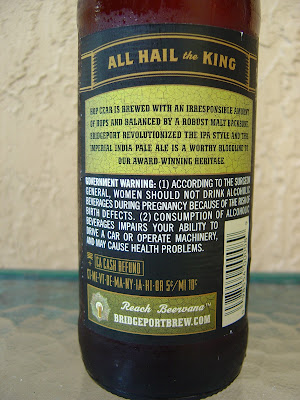 This was the wildcard in the care package.

Hey Christina. Nice wild card. Does that mean this was the one you didn't drink before? Thank you, again!

I love Bridgeport's IPA, but interestingly, I love it because they go easy on the hops. (Maybe they save them all for this one?) I'd kind of be curious to try this one though...

You may be right with your theory. This beer is very bitter, and 87 IBU is pretty high without some malty balance. Check it out and see if you agree.