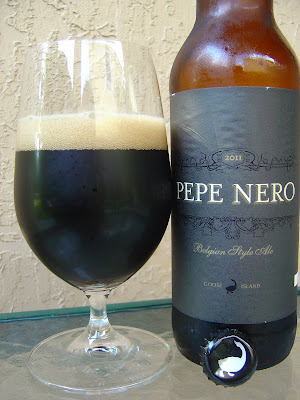 First of all, Happy Easter!

I'm drinking Pepe Nero 2011 brewed by Goose Island Beer Company in Chicago, Illinois. This is a Belgian Style Farmhouse Ale brewed with peppercorns, this particular one being bottled on 01/07/11 1030. This beer came home from my friend's recent Chicago trip. Thanks again!

I wanted Lolita, Juliet and Madame Rose, but those are only sold at bars and restaurants. At least that was the case when he was there. Since then, Budweiser bought the brewery. That purchase brought on a shit-storm of bellyaching about never buying Goose Island again because the corporate monsters are evil. I took some shit myself and a few underhanded jabs for being honest because I didn't see it as a sad day in America. A famous filmmaker wrote a piece that there was "almost universal dismay" about the news. I completely disagreed based on what I read and a lot of comments. So I launched my own (not) scientific poll. I will say I was fair as possible, even begging the dismayed ones to say so. Without further ado, the results of that poll.

How you feel about the Anheuser-Busch purchase of Goose Island Brewery?

I'm pretty dismayed myself that this was a nearly perfect Gaussian Curve. For the record, my vote was Optimistic. But Bud better get me those three sisters if it wants to keep that vote. OK, beer time.

Raisins, caramel, sweet and roasted malty aroma. A little more powerful as it warmed up. Quite different flavors from the aroma. Roasted coffee and peppery spicy beginning. Those are swiftly followed by an orange and lemon rind citrus bite. Sharp carbonation takes jabs at the palate as well. Pepe Nero definitely leans bitter.

Now there is a secondary underlying flavor profile that really shows itself as you enter the second half of big 22. At first I was like, "Belgian-style whatever? Pfft!" But some yeasty funky spicy pepper thing-a-ma-jig starts to grow and multiply. There is a distinct peppercorn flavor, especially in the aftertaste. A subtle tang is definitely present, and when I think about it, that flavor was really there all along. Eerie! The 6% alcohol wasn't really noticeable, except perhaps as it aided in delivering a dry finish.

Anyway, a pretty good beer, definitely interesting. However, it's my least favorite of their Belgians so far. I love me some Sofie, and Fleur and Matilda rock the casbah too! If you don't need to import it to unlucky states like Florida, check it out!

Three Novellas: The Nun & The Partisan,Runners In The Night,Vito's Big Score -- Pepe Nero

I've heard good things about the Pepe and am surprised you were only so-so on it. It seems like I've had this beer somewhere...maybe mid-stream of one of my beer meetups (where what's in my glass becomes foggy).

I personally have no issue with AB buying up GI. I think it's definitely a wait and see kinda thing. If AB executes the buy-out correctly, they won't change any recipes, will keep the brewing staff, and so on to ensure that quality and consistency doesn't change.

Yeah, I try to plug my science background when I can. And I really hope Bud lets Goose Island remain a division, mostly hands off.

As for this beer, was good. I just love the others.