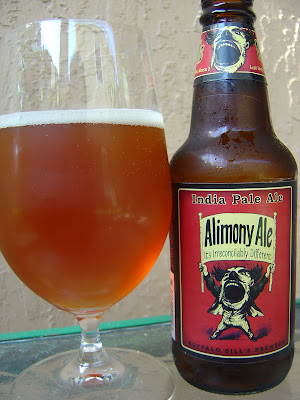 Tonight I'm drinking Alimony Ale brewed by Independent Brewers United in Seattle, Portland or Berkeley for Buffalo Bill's Brewery in Hayward, California. The clown-dude depicted on the front of the label is holding a banner that says, "Alimony Ale: It's Irreconcilably Different". Up on the neck of the bottle, "Good beer, like true love, doesn't last long. Enjoy it while it lasts." Nice attitude!

Malty caramel, bread, herbal, with just a whiff of orange. Sweet caramel flavors start things followed by some sweet orange. Though there never is any real bitter answer to that sweetness, some light prickly carbonation and the 6.8% alcohol do try to tame it. A little medicinal flavor comes through before you end with a dry finish. Medium body and chewy. Good flavors just a little too sweet. I wanted some IPA bitter answer and refreshment and never got it.

Hit Him Where It Hurts: The Take-No-Prisoners Guide to Divorce--Alimony, Custody, Child Support, and More

Irreconcilable Differences: The Battle for the Heart & Soul of America's Animal Shelters