The Best of Beer Camp: #37 Weizenbock 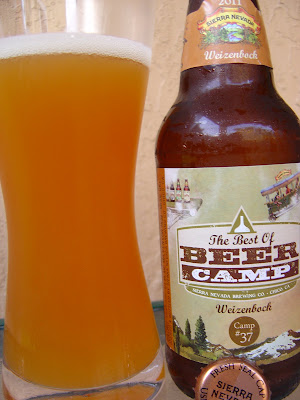 Tonight I'm drinking The Best of Beer Camp #37 Weizenbock brewed by Sierra Nevada Brewing Company in Chico, California. This beer came in a mixed 12-pack of four different Beer Camp beers, and I think the idea is terrific. The label has a mountain scene along with some thumbnail depictions of things that might remind you of camping. Not awesome label art or eye-catching or inspiring, seems a bit rushed to get it done. Anyway, this is my first of the four options.

Looking around, Sierra Nevada is just about to start accepting video entries on May 16 for this year's Beer Camp.  They have some of the winning entries from last year there as well. And unlike the label on this beer, the website is really creative (though it loads much too slowly). Here are some of the beer descriptions, though I'm quite a bit confused as some don't match up with the ones on the label, #37 being one of them.

Very thick and cloudy pour, really noticeable. Tons of wheat, tons of banana and a little spice for an aroma. Loads of banana flavors dominate in the beginning. More subtle orange in the background blends with some sweet malty caramel. Spicy cloves and cinnamon along with some prickly carbonation challenge the sweetness in a wonderful way.

Great wheat flavor and texture is also present throughout, and toward the end is brought to the front by a nice accent from the 6.8% alcohol. Quite a nice tang that's really indescribable! Refreshing, flavorful, terrific! I hope the other three are just as good as this one. So far, I highly recommend and this is an excellent buy.

Thanks for reviewing this. It might just have to be my next purchase.

There was another comment on this post. I have a copy in my inbox if you don't believe me. But basically Blogger was not very reliable for the past day or more. Anyway, I was planning on answering the comment question, but I forgot what it was. Happens.