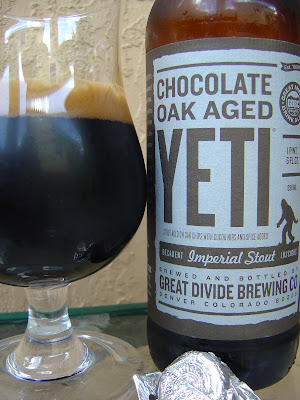 Today I'm drinking Chocolate Oak Aged Yeti Imperial Stout brewed by Great Divide Brewing Company in Denver, Colorado. This version hasn't been in South Florida before, as far as I know, but I really enjoyed the Regular and Espresso versions of Yeti. Nom Nom Nom! The bomber bottle story calls this a "revered incarnation" of normal Yeti that has "an aroma and flavor akin to a gourmet chocolate bar." Bottled on April 19, 2011.

Hello rich chocolate cocoa powder with your luscious hints of vanilla. Wow! What an aroma! Your flavors start out with prominent chocolate too. There is also a ton of vanilla and wood flavors making for a sensory overdose. Pause. Pause. Pause. Next, orange and licorice come in before you really start feeling the effects of this beer. The wood is smoldering making some smoke, and a fire finally breaks out in your mouth and chest.

Yep, the 9.5% alcohol is pretty boozy from start to finish and really makes the wood stand out. Now I was sitting here kicking myself trying to figure out what this strange lighter fluid woody hot twang was from middle to finish and lasting long after the beer was gone. I guess that should be my 800th lesson on reading before opening. The story on the side says they used "a dash of cayenne [to keep] things lively, adding just a bit of heat to the finish." Holy shit! A dash? I almost blamed the roaring hotness on this chick I saw at Publix today, but alas it was just the added peppers in my beer. 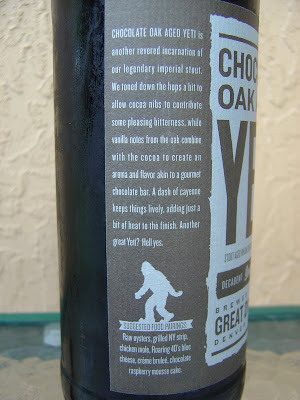 That burn sticks around, no joke! Now, anyone who's ever been around me knows I LOVE hot peppers, the spicier the better. I eat hot peppers alone. But for real, these guys should have just skipped that part of this beer. I think it was unnecessary and actually seriously detracted from an otherwise great beer.

Smooth, thick body, low carbonation, all really nice. Not a sweet beer at all. Check it out, watch out for the burn. Serious wood too, which is also not a super plus for me, as I've mentioned before.