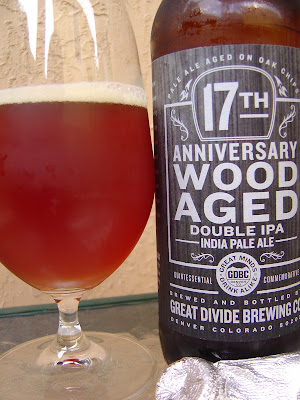 Today I'm drinking Great Divide 17th Anniversary Wood Aged Double IPA brewed by Great Divide Brewing Company in Denver, Colorado. I'm pretty sure you guys understand the occasion for brewing this beer. The label is nice with silver lettering on wood-panel blacks and grays. The story on the side says this beer is based on their award-winning Denver Pale Ale and was aged on French and American oak chips. Finally, though, some suggested food pairings I've heard of and could pull off: bacon & blue cheese hamburger, barbecue ribs, caramel cheesecake, and others. I paired it with nothing but my lips though this time. Big 22 was bottled on March 17, 2011.

Lots of oak in the aroma, buttery, and with a sweet toffee backing. Very pleasant. Sweet caramel and buttery toffee flavors are your main starting point. Oh, and megatons of oak character. I can't stop thinking buttered toast with a strong dose of vanilla on the side. You will taste some typical IPA flavors as well, mainly pine and a touch of citrus. Oh and you sure as hell will know that there is plenty of alcohol in this beer. You might not guess it's 10.0% as the wood is constantly there soothing and saying everything will be just fine. Like the bottle says, the wood "rounds the edges".

I guess in the end, the pine flavors win by a nose and it is on the slightly bitter side of wonderfully balanced. The consistency is quite thick and chewy--I'd have actually preferred it a little thinner and a bit more bitter. Definitely hard not to keep coming back to oak and butter as they are really prevalent parts. It's not a secret that I am mostly not a wood guy, so don't let it bother you if I say that part of this beer was nearing too much. Anyway, I liked this beer quite a bit. Check it out. Congratulations, Great Divide! 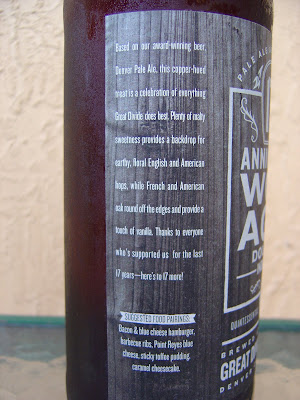 Posted by Beer Drinker Rob at 9:08 AM