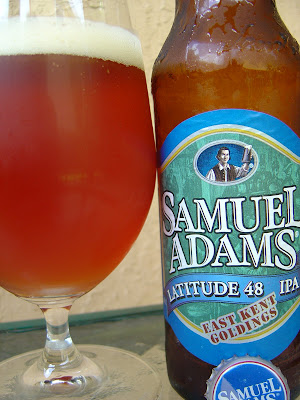 Look closely. You might think I'm being lazy and just posting the same thing as yesterday. Nope!

Today I'm drinking Latitude 48 Deconstructed IPA: East Kent Goldings brewed by The Boston Beer Company in Boston, Cincinnati or Breinigsville, Pennsylvania. The label says EAST KENT GOLDINGS in red lettering to set it apart from the others in the series, just as they did with SIMCOE that I reviewed yesterday. The story on the back talks about the East Kent Goldings and their history, noting their East Kent, UK growing region, on the 48th latitude. Enjoy before September, 2011.

Sweet bread dough and quite a malty aroma. Flavors also start out sweet and malty, with herbal tea and earthy characteristics. You progress next with some medicinal flavors while still not shaking the overt sweetness. There is not really any bitterness in this beer, though there is a bit of a spicy kick toward the end. You finish with some dry band aid flavors. The 6.0% alcohol wasn't really that noticeable. I guess this is a British IPA based on the hops used and the contrast to the American IPAs I usually drink. Not sure. This beer wasn't a winner for me. 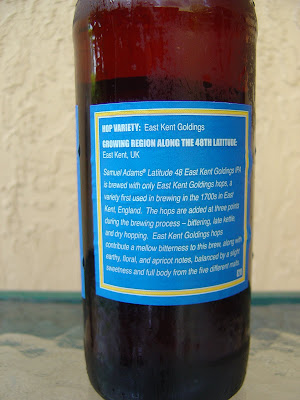 What exactly are "band-aid flavors?" haha. Sounds awful. I was surprised you liked yesterday's Sam Adams since you haven't been a big fan of a lot of their 1-offs like the home-brew series. I do like the idea behind the Latitude 48 series though.

I don't enjoy their seasonals like the Noble Pils, Old Fezziwig, or the Cranberry Lambic. But a good old Boston Lager is still one of my favorites.

Hey Nick. I don't know. Dry, medicinal off flavors. You know that distinct smell a band aid has? Like that in a flavor.

Personally, I have many favorites from Sam but also a lot that I don't like, but Boston Lager is a beer I regularly enjoy.