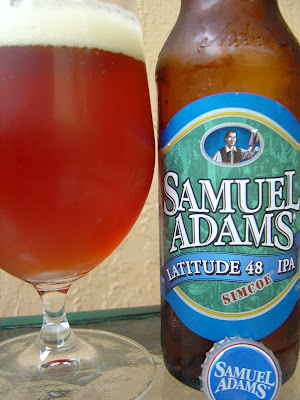 So Samuel Adams released this Latitude 48 IPA last year, and it was well received. Latitude 48 is made with five hop varieties all grown along the 48th latitude. Go figure. Some genius got this idea to take the beer apart and brew individual beers with each of the five hop varieties alone, and that idea recently came to fruition when they released the Samuel Adams Deconstructed mixed 12 pack. Two bottles of each new beer plus two of the original Latitude 48 IPA.

Today I'm drinking Latitude 48 Deconstructed IPA: Simcoe brewed by The Boston Beer Company in Boston, Cincinnati or Breinigsville, Pennsylvania. The label for this beer is identical to the original except for the haphazard ALL CAPS SIMCOE written in red on the banner. I know they are trying really hard to brand these beers, but I think Sam needs a face lift. There is a little story on the back letting you know that they used Simcoe hops from the Yakima Valley, Washington growing region, on the 48th latitude. Also, Simcoe is a registered trademark of Select Botanicals Group, for the record. Enjoy before September, 2011.

Bready, hoppy fruity aroma, even with a hint of white wine. Right from the beginning, this was quite a hoppy IPA, nicely bitter. Lots of grapefruit and lemon rind are prominent throughout, but the flavors don't stop there. There is a nice flowery and fruity orange component that adds a hint of sweet balance, too. Lightly spicy and you can taste the 6.0% alcohol ever so slightly. Quite fresh and a welcome refreshment. The carbonation was medium high and perfect. So far, Sam is one-for-one in this series. Can't wait for the next one. 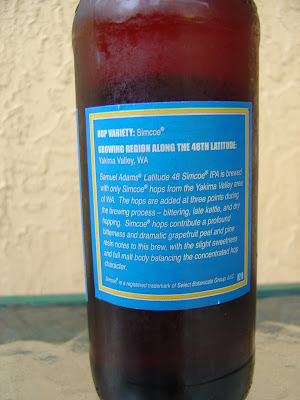