Robert Johnson's Hellhound On My Ale 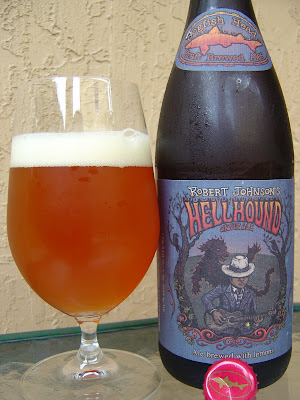 Today I'm drinking Robert Johnson's Hellhound On My Ale brewed by Dogfish Head Craft Brewery in Milton, Delaware. This is an imperial IPA brewed with lemons and is dedicated to Mississippi blues legend Robert Johnson on his 100th birthday. Dogfish did everything in 100's or 10.0's including 100 IBUs, 10.0% alcohol and using 100% centennial hops. Read the story below for even more 100's. Also, they set up a website for this beer if you'd like to read more.

Dogfish employs great artists for its label designs. I asked Dogfish on Twitter who the artist is for this bottle, and I will let you know when I find out, assuming it's not top secret! This label depicts young Robert Johnson playing a guitar with the hellhound lurking behind him. Uh Oh, I guess that means I better drink this beer to help stave off the attack! Great blue(s) colors too! The story on the side also mentions that lemons were added in recognition of Robert Johnson's mentor, Blind Lemon Jefferson. OK. Here we go.

Update: I really should have guessed that this was Marq Spusta's label artwork, but a commenter below let me know that. Thanks. And then it was easy to find a link on Marq's site about it.

Citrusy lemon aroma, grassy, with just a little herbal malty backing. Malty, bready, tea-like start, but only for a fleeting instant. A rush of flowery lemon drops comes immediately behind it! The lemon is very distinct, not really bitter, but rather somehow candied. Aha! I got it! Some toffee candy bars were spiked with enormous amounts of lemon and further topped with finely-crushed dried pine cone resin. Yeah, I know, it's complicated! 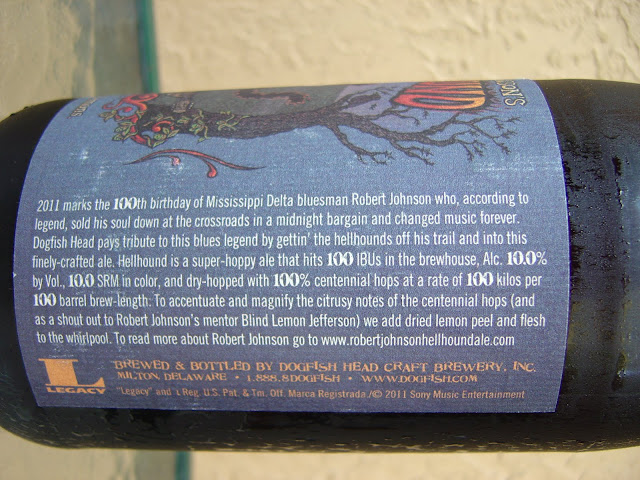 There is bitterness in the background, but it's not too overwhelming. The 10.0% alcohol is not harsh, but it adds to this feeling that you are drinking some kind of lemony household cleaner. That's the worst part of the experience, and one that is not on the sidelines. The flavors don't seem to all be working in harmony, though it could just be the gigantic lemon addition. Creamy, upper-level carbonation is perfect, chewy body OK too. Solid, flavorful beer and really unique, which is at least half the reason to try a beer like this, but give me their 90 Minute IPA instead any day. I think I will take my other bottle to the Cuban neighbor's house like I did with my second bottle of Sam Adams Infinium, but only when I'm invited to another dominoes and Cuban food party!

It sounds pretty tasty. I love the way Dogfish Head is inspired by people to brew beers in their honor.
I picked up a bottle last night, and after reading your review I'm amped up to drink it.

Marq Spusta is the artist. I agree with your review that the flavors and ABV did not quite come together on this one.

Enjoy, Dale. Let me know what you think.

Thanks, spacewolf. I really should have guessed that having purchased all of his seasonal prints from last year with them, and knowing his history with their label art.

I want to try this just for the Robert Johnson connection.

Honestly, Sean. I can't say I can recognize one Robert Johnson song, but I'm going to try to change that. I do like trying the dedicated one-offs though.