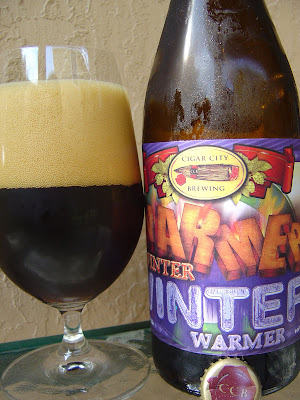 Today I'm drinking Warmer Winter Winter Warmer brewed by Cigar City Brewing in Tampa, Florida. This beer, at least the 2009 version, was the first beer from Cigar City I ever drank. Today's bottle is from Winter, 2010--I've just had it laying around for a while. I don't remember the older bottle saying it was an English-style Barley Wine, but this one does. The label, designed by Juan Alvarez, is different and more colorful this time around. The story goes on to suggest this beer is made "to celebrate the idea of a snowy winter landscape" which is very funny for us Floridians. I did turn the AC colder as was recommended though!

Enormous head! And it sticks around too. Huge toffee and caramel aroma, sweet, and with a big raisin helping on the side. Flavors are just like that as well. Caramel and toffee and raisins, each more prominent than the others. Go figure that one out. Despite the large sweetness, you can taste quite a good dose of hops. Between the hops and heat from the 10% alcohol, the beer tries to make you forget how sweet it is. But more sweet orange and brown sugar flavors don't let that happen.

Chewy, sticky, syrupy. Quite a bit too sweet and unbalanced. The sherry-like flavors and others mentioned above are nice, but it's hard to get past the beer's sweetness and consistency. Tough to finish, though to be fair, we are talking about finishing a wine bottle of beer! 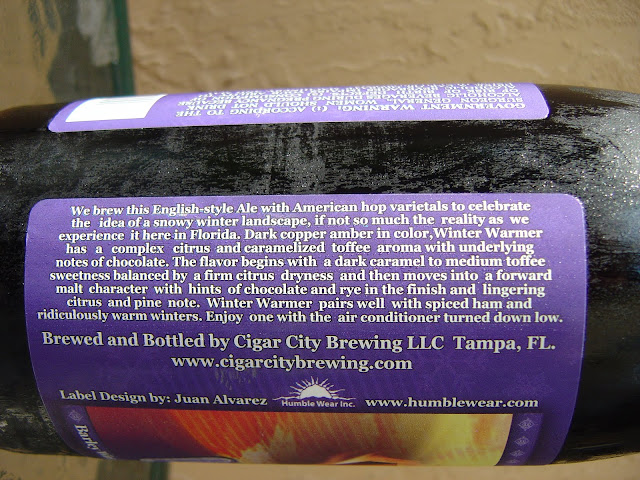 I live in your hometown of Philly and I've been trying to forget winter for two months now, so thanks for the reminder.

Anyway, do you prefer when a beer has an aroma that matches the taste, as you said this one does? Or is it better when the aroma leads you one way and the taste surprises you?

Also, I've been seeing Cigar City cases up here more frequently. If you had to pick one of theirs, which would you recommend?

Don't worry, Nick. I will be hot soon enough in Philly. I am actually a bit tired of the extreme heat here and would prefer somewhere in the middle.

I like when the aroma is a lead-in for the flavors and I'm not totally shocked by a big difference. But I'm OK if they are not clones of each other. Smell is definitely a part of taste though.

As for Cigar City, I've been known and chastised for saying they are overrated. What I actually said was that the beers that are available in the Miami market are not their best beers, in my opinion. Some of their prizes never leave Tampa, and I've never been there.

I did enjoy Big Sound Scotch Ale and Bolita Nut Brown as well. Of course the famous Jai Alai IPA is a solid beer, but I like other IPA's better. You should try it though.

I'll skip the list of CC disappointments for now. Let me know what you try.