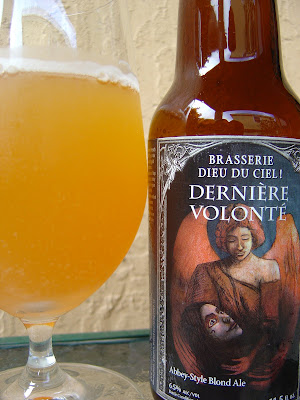 Today I'm drinking Dernière Volonté brewed by Microbrasserie Dieu du Ciel in St-Jerome, Quebec, Canada. I thoroughly enjoyed their Péché Mortel just a few days ago. As was the case with that beer, the illustration for this bottle was done by yannick.brosseau@sympatico.ca. The name for this beer translates to "Last Will" and the illustration appears to show one girl holding another that is dying. 11.5 ounce bottle and none of the numbers are notched on the side.

Yeast, fruity apple and faint spice aroma. Not so much going on. Light fruity sweetness to start, but that rapidly turns to a grassy bitter which lasts throughout. This beer has quite the peppery spicy undertone to it as well. You will not have any trouble finding a yeasty twangy kind of flavor, either. You finish with a lemony and hoppy bitter combined with a touch of the 6.5% alcohol dryness. A light funk is left behind which I didn't really dig. I didn't do a very good job keeping the yeast out of my glass, so that could have contributed to that. Not a bad beer. 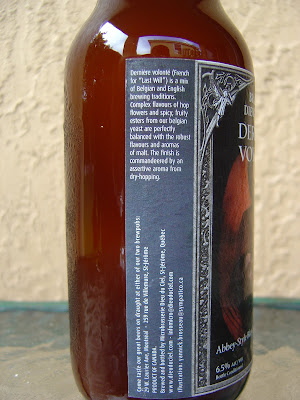 Posted by Beer Drinker Rob at 9:33 AM