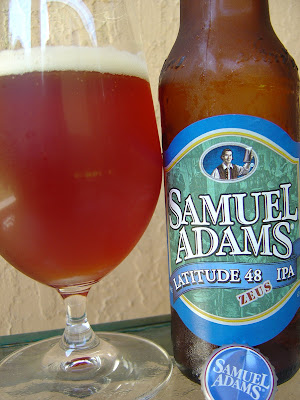 Hurricane season starts today. Your about to see how I cleverly planned today's post around a hop named after King of the gods and weather. Or not.

Today I'm drinking Latitude 48 Deconstructed IPA: Zeus brewed by The Boston Beer Company in Boston, Cincinnati or Breinigsville, Pennsylvania. The label for this beer is the Latitude 48 label with ZEUS written in red on the front, just like they did with the others. The story on the back sets your expectations for this beer and lets you know Zeus hops are from the Yakima Valley, Washington growing region, on the 48th latitude. Enjoy before September, 2011.

Malty sweet and herbal aroma, fruity with a little crisp hoppy lemon in the background. Bang. Tangy zing with a peppermint flavor and cooling sensation. Very interesting! After a few sips, you will start to feel some aggressive grapefruit and lemon rind, making for quite a bitter beer. There are lots of pine flavors and a bit of spice and grass, too. I can't shake the minty profile either, and it is not my imagination. The 6.0% makes it stand out even more.

The intense bitterness coupled with some prickly carbonation offers a fairly harsh feeling in the mouth, beyond refreshment. Although the malty flavors are detectable, they are completely buried in the background. This was a decent beer, but after drinking three of the five in this series, I'm beginning to see why brewers combine different hop varieties in their beers. And big props to any that pull off a single hop brew. Hmmm. I think I know what next year's Science Project is going to be! 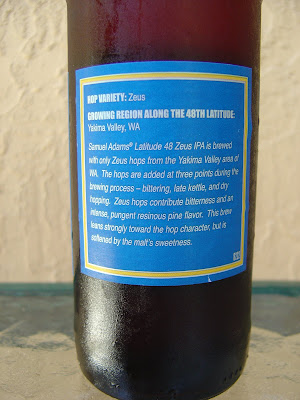 Now, off to the fridge for a Torpedo Extra IPA to sweeten things up on my palate and to rinse away the mint!

Posted by Beer Drinker Rob at 8:42 AM

I've got to admit, when I heard that Sam Adams was doing this to help educate people on different hops varieties, I gat rather excited. Still have to pick up a case for myself.

Thanks for these reviews - you've whetted my appetite even more.

Hey Hannah. It definitely is an education more than it is 5 new beers that people will enjoy. I can't say I really love any of them, but it is an interesting experiment.

I will post the other two, but today I'm going to take a break and post something fun. I think you'll like it. OK. Now I just need to proof-read it one more time.

Pretty much spot on with your comment that it is more about education than 5 new beers that should come back. They were all decent and Zeus may have been my favorite single hop version, but I won't exactly be going out of my way to track down more.

Hey Lucas. It was that smarty Hannah that used the word "educate" first :) though I was happy to copy her. I thought Simcoe was the best and didn't really like any of the others. I was probably too gentle with some of my comments on them because of the "school" setting.