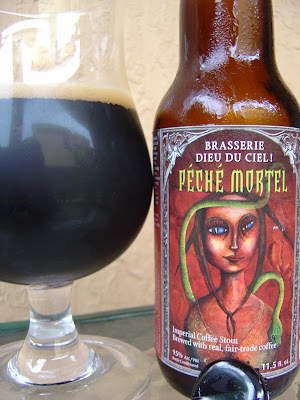 Today I'm drinking Péché Mortel brewed by Microbrasserie Dieu du Ciel in St-Jerome, Quebec, Canada. This is a new beer to South Florida and my local Total Wine. In fact, this beer and a few of his friends were not even for sale yet when I bothered Julius to rip open a bunch of boxes from the back of the storage room today. That was further noted when none of the bottles would ring up at the cash register. I am always a source of tension at that store, for real. LOL. Way too much money later, I hurried home to ice this beer.

The label says the awesome illustration was done by yannick.brosseau@sympatico.ca so I'm guessing you are smart enough to figure out the name if you'd like to know it. The Picasso-like lady looks all too comfortable with serpents slithering around her head. Perhaps that is Eve in the Garden of Good and Evil? I don't know.Very cool.

The story on the side says that this beer was born at their Montreal brewpub in October, 2001 and is infused with "real, fair-trade coffee". As opposed to the fake kind I guess. This particular bottle has a 3/4 (in between) and a 5 both notched on a 0-9 scale, which I have no clue about their meaning. The bottle is only 11.5 ounces and cost five bucks so it better kick some ass (hint: Ed Roberts). 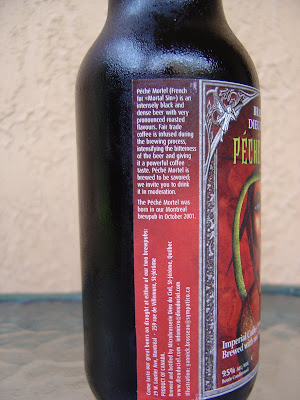 Finally, what's in a name like Péché Mortel? "What do the Frenchies mean by that? Is that like Dogfish Head Festina Pêche? They are spelled the same. Is this a fruity peach beer? I hate those." No dude, it's not the same thing. Do you not see those accents over the letters? Pêche means peach and can also mean fishing. Péché, like in this beer name, means sin. Mortal Sin! And they are not pronounced the same way either. There is your French lesson for today, class.

Rich cocoa and nice coffee aroma. Very welcoming and pleasant. Roasted coffee bean flavors dominate the very beginning of the beer. Despite the huge roasted flavors, they are not harsh which is a major beef I have with many beers; rather, this is incredibly smooth. I love the chocolate and vanilla and licorice accents that keep popping in and out to give some complexity to the beer and ease away the initial intense roasted flavors.

Alcohol warmth? Yes, please, on the hottest day in Miami in the past six years! The 9.5% alcohol does an excellent job of making the supporting flavors stand out while providing some heat and even low-level burn. Dark cherries and a port-like flavor come out of the slight booziness. The flavor profile really is quite nice and diverse. I find the coffee to be a persistent flavor but not overbearing or dominant in any way whatsoever. Good body, balanced to a nice bitterness. Excellent beer! Yes, I did buy two of this particular one. Go get your own though. Now!

Posted by Beer Drinker Rob at 9:39 AM

Thanks for the review, this beer looks great. I'll keep my eyes open for it - hopefully it'll make its way to NJ in the near future.

I'd been lucky enough to have this beer a couple times before, but it's great to see it here finally. Really gotta like coffee to drink this one, it is black, black, black.

Hey Michelle. Yeah, I hope you get to try it. NJ is closer to Canada than FL.

Yeah, Patrick. Coffee is prevalent but I don't find it to be as intrusive or dominant as I expected, not even close.

Nice beer all around.