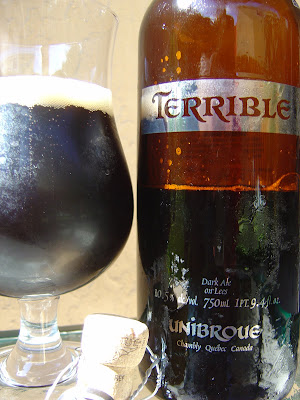 Today I'm drinking Terrible brewed by Unibroue in Chambly, Quebec, Canada. This has become a favorite brewery of mine, as I really have enjoyed almost every beer I've had from them. I grabbed this beer a nameless retailer the other day. Shhh. I don't want to upset girlfriend Total Wine. Let's just call them ABC Liquor Store for simplicity. Anyway, I decided to go for it. The wine bottle has a simple yet elegant presentation, with TERRIBLE outlined in a shiny silver box so you can see through the letters. I guess there's a design term for that but... this dark ale on lees is best before 04-15-2015.

What I'm drinking right now is TERRIBLE
When I started drinking this, I tried for an Abbott and Costello moment, as you can see above. The joke was immediately spotted by everyone, first by the sharp and witty Hannah from Kegworks. Next, Mr. Zab made it a true A+C routine with some extra unexpected banter that really made me laugh. Well played, Mr. Zab! You can see the whole routine below.

First, the head was not enormous like other Unibroue beers, notable. Dark cherry and prunes over yeast, very nice aroma. Caramel and candy sugar flavor start. Sweet prunes and raisins add some additional sweetness and richness in the beginning. But this beer is only fleetingly sweet, if at all. Some tart and sour apples come next, with that signature Unibroue yeasty taste.

Carbonation is strong, yet creamy with a fine bubbly texture. The 10.5% alcohol is noticeable but wonderfully disguised, and it's probably gonna make me strike out against my five year old in wiffle ball here in a few minutes. After a few sips, a white wine grape flavor becomes more pronounced and jumps all over any remaining sweetness. Smooth, nice texture. Enjoyable and terrific beer. Another Unibroue winner!

DailyBeerReview Beer Drinker Rob
@MrZab I told you, it's terrible

MrZab Rick Zaborowski
@DailyBeerReview C'mon - its not the end of the world. :)

DailyBeerReview Beer Drinker Rob
@MrZab Haha. That's awesome, but no, you're right, it's not La Fin du Monde. It's Terrible. 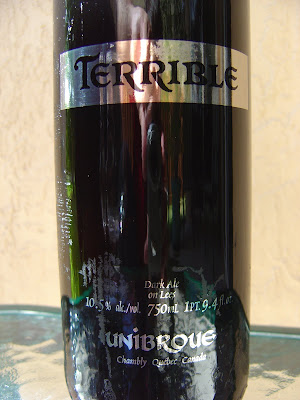 I thought this was a pretty cool photo too! What do you think?

Who's On First? Abbott & Costello MP3

Brew North: How Canadians Made Beer and Beer Made Canada

Posted by Beer Drinker Rob at 9:19 AM