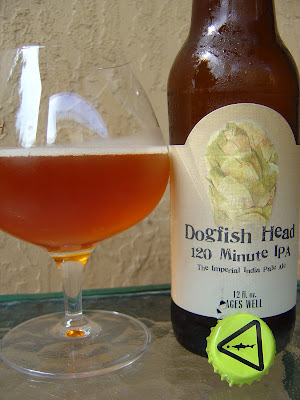 Today I'm drinking 120 Minute IPA brewed by Dogfish Head Craft Brewery in Milton, Delaware. I was on vacation when Total Wine received its two cases of this beer and proceeded to sell out in just a few hours, despite limiting each person to one bottle. I asked around if there was any available and once again, Ed Roberts came through and said I could have the bottle he bought for himself for the bargain rate of $10 for the 12 ounces, what Total Wine sold them for.

This is the first time in probably close to two years that this beer has hit the shelves, so its anticipation has been overly geeked up. I've never had it though, so here I am fueling that some myself. As you can see from the photo, the bottle and label didn't get treated with very much respect in my refrigerator. I think my wife made that rip with a pickle jar or something, so sorry if you were expecting pristine photography.

The side of the label says, "What you have here is the holy grail for hopheads. This beer is continually hopped over a 120-minute boil and then dry-hopped every day for a month. Enjoy now or age for a decade or so." Well, so much for aging this bottle. But that reminds me that I only have five more months until I dig up my Dogfish Olde School Barleywine that I buried in the back yard last year!

So yes, I consider myself warned by the neon green warning cap. This beer has 18% alcohol in it. The label even calls this "The Imperial India Pale Ale" using "The" like people who attend or are alumni of The Ohio State University. Never got that! I poured this into my Hennessy snifter which mostly just sees Grand Marnier, but since this is that kind of beer, well, OK. GM is gonna be pissed though!

Hoppy and lemony aroma, light citrus, with a really pleasant tropical fruity backing. Syrupy with quite an intense and concentrated fruity flavor beginning. You can certainly feel and taste the hops; however, this is not a bitter beer at all. On the contrary, unexpectedly, 120 Minute IPA is actually pretty sweet. The 18% alcohol is apparent from the beginning, noticeable and warming, yet not a detriment at all. Not boozy.

Back to the fruit and sweet flavors, as they are prominent and really brought out well by the alcohol. Apples and raisins are all over  your mouth, start to finish, along with a strong sugary aspect. You can imagine some hints of caramel and brown sugar if you dare, but they are more accents. The texture of this beer is buttery and velvety, and as I already said, syrupy. The carbonation is pretty low, adding to that thick feeling. Comparing this to an after dinner drink is totally appropriate.

The most balanced this beer hits is with the finish where a light hoppiness lingers. A small burn on the lips lets you know this beer had some alcohol and you will sleep well tonight. Most amazing thing is it didn't taste anything like any IPA or DIPA and had zero bitterness to it. Glad I tried it, even at $10 for the bottle. However, saying I like 60 Minute and 90 Minute better is really going to throw a monkey wrench into my mathematical theorem, which already states 60 > 90. Add >120 please!

Posted by Beer Drinker Rob at 8:45 AM

Cool, you really have an Olde School buried in the backyard?

It has been a while since I have had 120, and at that time, I dont think that I appreciated beer on the same level as I do now. That being said, I think this year's release has been a product of a bad batch (apparently, last years was dumped because it wasnt good enough) and the marketing machine of Sam and the Discovery Channel. I am not saying it isn't good, or shouldnt be drank, but what I do remember is that before this year, I could always find it on shelves. Sometimes the bottles were on the shelves for over a year. Craziness. And I, of course, will buy a bottle if I ever see it on a shelf.

Nice review. I have two bottles I'm waiting to open. For me, the 120 shouldn't be judged as an IPA/DIPA. It's just a different beast. That said, I love this beer as a sipper and don't even consider it as a DIPA. It defies style. Still, I thought you were fair and the descriptions sound dead-on.

Patrick. Yes, you can see shovels and dirt and mulch and everything if you click that link. LOL.

Jay. No doubt about it. I can remember in my early days of this blog passing 120 on the shelf every week. Exactly what you said--TV and marketing and the fact it's been a long time.

Zac. Yeah, I'm not big into styles getting in the way. I don't really care and comment based on flavor. However, this line is totally misleading BS and not necessary: "holy grail for hopheads"

Rob, I agree. Marketing does as much harm as anything. It really should be sold as 120 Minute Ale or something. They could call it a sipping beer or hoppy barley wine. Still, I really enjoyed your take.