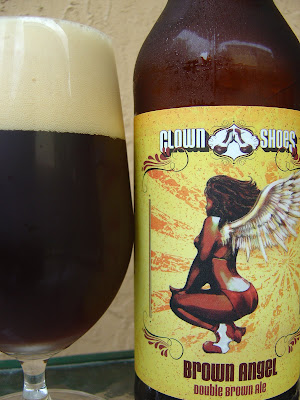 Today I'm drinking Clown Shoes Brown Angel, a Double Brown Ale brewed by Mercury Brewing Company in Ipswich, Massachusetts. Until about 10 pm last night, I had never even heard of this brewery. That's when I got a text from the awesome Ed Roberts from Total Wine that my store got in five new brewery direct beers from them. Then I woke up this morning to a terrific post by Greg at The Pour Curator about the controversial art on Clown Shoes labels and an ensuring battle over on Beer Advocate. I really gotta read that string soon.

So on the way home from the grind, I stopped and grabbed the new beers and am drinking one now. It was quite fun watching Julius go from never hearing of it to finding it on the computer to locating it stashed in the back of the warehouse. What an introduction in 17 hours!

So this one's called Brown Angel for both the style of beer and the hot chick on the label. I'm not smelling any controversy with this art, though. It's just a beautiful woman in a bikini. It's a bit strange how's she's managed to sprout angel wings, and wearing the clown shoes is a bit weird, but I can deal with the brewery theme. (On an unrelated note, my kid is watching Finding Nemo now, you know, with the Clown Fish.) The bottle story on the side finishes with, "This is NOT your old school brown, but rather a sexy American interpretation." Bottled 6/21/11. Damn, that is really fresh!

Nutty and sweet aroma, with caramel and cocoa powder, a little roasty too. Nice aroma. Caramel and malty flavors very prominent in the beginning, supported by a huge presence of smoke and ash. Next notice--a bit flat, which I rarely dig. Roasted and burnt nutty flavors permeate the beer from beginning to end as well. This beer is not sweet at all. Rather, some bitter lemony astringent citrus is an underlying flavor that makes me feel uncomfortable by the end of Big 22. On the thin side of medium body. You will finish with some roasted malt left behind on your palate. The 7% alcohol isn't a factor at all. Not bad, price was right. Check it out if you can. 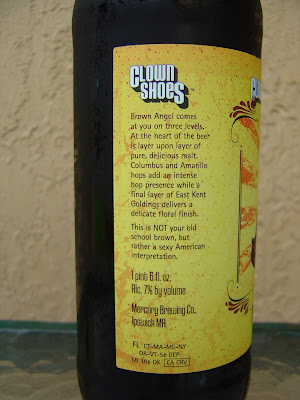 All About Beer -- Magazine Subscription

Haven't had Brown Angel yet, but I have sampled both their Tramp Stamp and Hoppy Feet.

Did NOT care for Hoppy Feet...a bit like liquid smoke without much in the way of bitter hops to balance it out. Kinda sad considering its supposed to be an IPA.

Tramp Stamp is an entirely different story. I am particularly fond of American IPAs with Belgian yeast, and this one rates up there.

Looking forward to seeing what you think of the others!

Hey Matt. 5 beers from these guys just arrived to S. Florida. I've had this one and just published Tramp Stamp, which agree with you is a very nice beer. http://www.dailybeerreview.com/2011/07/clown-shoes-tramp-stamp.html

To be honest, I don't even know the names of the other 3. Wasn't paying attention to the purchase.

I'm a big fan of sluts myself.