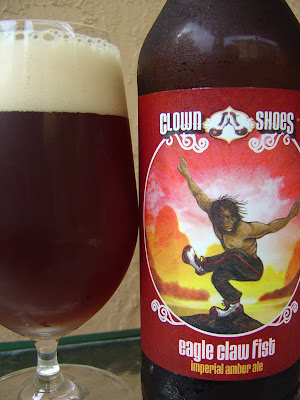 Today I'm drinking Clown Shoes Eagle Claw Fist, an Imperial Amber Ale brewed by Mercury Brewing Company in Ipswich, Massachusetts. I'm looking for some art controversy in the shirtless Kung Fu dude on the front, but I can't even invent an issue here. The pose looks like the Crane Kicker, so I checked in with him and received this quote, "That looks delicious. And nutritious."

Anyway, I'll let you read the story on the side yourself (see photo below), but the "over 100 IBUs" caught my attention. That's over 1250 Maries (and namesake Marathon Marie is just as bitter as ever with no alcohol and a baby on the way).

Light caramel, strong orange citrus and a very hoppy aroma. Strong citrus flavors, lemon and orange, along with pine start things off. I thought I hit a touch of sweet before a massive reversal of bitter fortune came and washed over my entire mouth. Wow! Besides just a little caramel and bread dough, this is an entirely bitter beer. The 8% alcohol is not hiding its face either, heightening the bitter flavors even more as it dries things out.

On the back side of this beer, things tasted a little medicinal with some astringent citrus and sourdough bread aspects. I swear I wasn't half way through Big 22 here when I almost dumped the rest, but after letting this thing warm up a little, I liked it a bit more. A little warmth and it lost some of that medicinal yuck, so keep that in mind. Still, the unbalanced nature and lashing aggressive bitterness were a little much for this cowboy. I guess this is the kind of beer they say puts hair on your chest! Not as bad as my review! Check it out.

As far as bombers go, decently priced, though bombers are all rip-offs as I've mentioned, including this one at $5 or $6. My very expensive Stone IPA six pack awaits, but if I compare it to this bottle by multiplying 2X12 ounces, it cost me $3.33 for an almost equivalent volume. Please find me a $3.33 bomber of even the shittiest craft beer around, let alone the Great Stone IPA (which by the way was a Malty Extravaganza compared to Eagle Claw Fist). 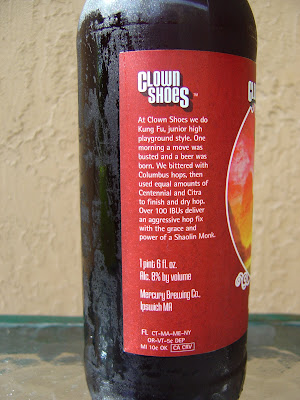 Posted by Beer Drinker Rob at 8:55 AM

Oh my god I can't wait to have beer again.

Yeah, I hear you. Glad I'm not pregnant.