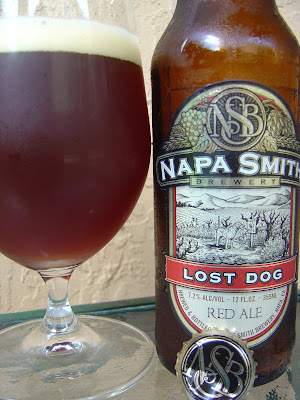 Today I'm drinking Lost Dog Red Ale brewed by Napa Smith Brewery in Napa, California. I had never heard of this brewery until yesterday when I spotted three of their beers on the shelf at my local Total Wine. Of course I grabbed one of each to check out. The label depicts a man calling for a his lost dog in the wilderness mountains. The dog is front and center and doesn't appear to be lost at all; he's actually reading a posted sign that says Lost Dog, snickering. The dog theme continues as they describe the "hoppy finish that practically rolls over and begs for another taste". The back label quotes the Lost Dog upon being found as saying, "Woof, Woof" which I think loosely translates to something like "Suckers!"

Sweet caramel, very malty aroma with perhaps just a faint citrus aroma. Quite the malty flavors to start as well. Toasted grains and rich caramel. But some metallic flavors take over in the middle while the beer thins out at the same, making for a double whammy. You know, this tastes like the kind of brown ale I never like. Roasty, a bit nutty, with some ugly bitterness. Those flavors seem to be accentuated by the 7.2% alcohol as well. Carbonation is good but a harsh metallic bitterness is left behind for an aftertaste. I'd skip it and hopefully the novelty of a new brewery name wont trick you too. 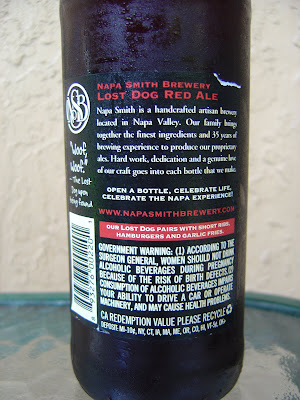 The Lost Dogs: Michael Vick's Dogs and Their Tale of Rescue and Redemption

Posted by Beer Drinker Rob at 8:07 AM