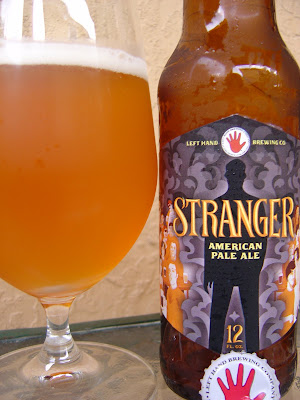 Today I'm drinking Stranger American Pale Ale brewed by Left Hand Brewing Company in Longmont, Colorado. The label caught my eye as I'd never seen it before. Total Wine still had the Jackman's American Pale Ale tag, description and price below it, so I assumed that it was a rebranding of that beer. I did some sleuthing around (I typed one phrase into Google) and found out from the Atlanta Beer Master that this is actually a new beer and new recipe, with Jackman's being retired last year.

I really like the label, designed by Moxie Sozo with the art work done by Nate Dyer. Right in the center of attention is a large shadow of a man, The Stranger. But on both sides of him are groups of friendly faces having a good time drinking. Not sure the dude on the right with his cigarette and big plume of smoke is too contemporary. Same with the scruffy hippie dude in the back left that is sucking his cig like there are none left in the world. Maybe someone should alert Beer Advocate that there is another inappropriate label out there so a 300-plus comment string can be started! Hmmm. What do you think? I think those two should have at least been outside in the cold and shivering. Am I right?

Light fruity aroma, apples and peaches, on the sweet side. Sweet fruity flavors are very dominant in the beginning, quite peachy. Some toasted bread and continued maltiness survive another few seconds. That's when a solid lemon zest and great citrus stealthily come in and calm the beer to a perfect balance, lightly on the bitter side of neutral. A hint of spice and light grassy flavors round out the profile. Carbonation is on the high end and just right. Solid body. Refreshing and flavorful, an easy drinker.

Posted by Beer Drinker Rob at 8:47 AM