Antares Part 1: A Brewery Introduction With An Antares Kölsch

I know you think I'm magnificent, but I'm pretty much going to try to deliver the impossible. I'm going to review the Antares Beer Company, one I'd never heard of until last month. To make the challenge even more, well, challenging, I have never been to the brewery. In fact, I've never been to Argentina where it is located. Further handicapping me, I don't speak the language of Argentina (which is the same as South Florida). And I plan on making this a series, each part paired with one of their beers. (I'm not sure how many parts yet. More on that in a bit.)

I know you have a lot of questions, but we have plenty of time. You guys remember Ofelia? She's the chick I "met" after we both went to see Cirque du Soleil's Kooza in January. She's an iPhone picture-taking expert as you can see from some of the photos I published there (and here). In addition, it turns out that she works for the agency that invited me to the Hatuey launch in June and was responsible for adding my name to the pool of potential invited beer bloggers. Smart girl! Well, the same Ofelia is from Argentina, and during a recent vacation, she went out of her way to bring home five beers from Antares, get quotes from the owners, and take dozens of photos. Give her a hug next time you see her!

Here is where I tell you she is friends with the owner of Antares who is apparently very excited to hear about his beers on North American soil. This guy gave her the beers and she gave them to me, so I didn't pay for them. I did, however, pay Mr. Brown to bring them from Brickell to my house in Miramar so as not to inflame my allergies to Dade County. I actually started writing this before I even received the beers. Quite the production with Brown Logistics, too! Here's another Mr. Brown that I can't stop laughing about every time I hear it!

And that's where I stopped writing, before this story got really interesting. You see, Mr. Brown didn't pick up the beers at the Daily Drop Off Spot for two days in a row, despite Ofelia making sure they knew at least one package would be waiting for them. A weekend passed and to the dismay of everyone, the box was still in the same spot the next Monday morning. The dismay wasn't for the lack of expert logistics that Brown brags on, but that was certainly the cause. You see, over the weekend, some asshole in Brickell rifled through the package and stole all the beers! Unbelievable in a building with hired security. I hope whoever stole them got a massive hangover and that the bottles were infected and tasted horrible!

I tried to let Ofelia know that except for being a little disappointed, the only real thing lost was effort. These beers are not valuable financially except for their scarcity to the Republic of Miami. They are not irreplaceable relics, either. I may have gone too far, as I got no reply and not even a glimmer of "haha", when I said I was relieved that at least the only microchip with the Krabby Patty Formula was not in that box. LOL.

But Ofelia amped things up a notch and convinced the "Best Husband in the World" (pictured to your left) to give me two of his remaining four bottles that he brought back for himself. What a nice guy! She also had already put a call into her mother in Argentina, and it's likely that the other three Antares' beers will be traveling with her in October. So I guess I can finish the series then. I LOVE happy endings, don't you?

So Mr. Brown got a second chance, but this time the package was put right in his hands. I received the first two beers yesterday. So the plan right now is to review one beer with this introduction and the other with another segment in this series, with a few remaining entries to come in a few months. Probably better that way, anyway, spreading it out. After everything, Please God, let these beers be the most wonderful nectar on earth! :) And thanks for all the effort, Ofelia!

Antares Beer Company in Mar del Plata, Argentina (pictures from Mendoza location, though) lists five beers that it brews on the English version of their website. My Spanish is rusty at best, but don't they have a few extras here? (Seven plus some Brewmaster Specials). I was most surprised to see the variety of styles they brew. Mi esposa es Colombiana, and I've been to Bogota and other Colombian cities a handful of times, always checking out the local beers. I've also sampled my share of beer from Mexico and other countries in Central and South America. While there may be a few exceptions, I find it extremely easy to generalize the crap that I have been exposed to--mass produced boring lager and pilsner beers only to drink when you run out of whisky!

But Antares has a Barley Wine? And a Scotch Ale? And a Kölsch? And an Imperial Stout? Damn Straight! That is very impressive and made me really want to try these beers. There is almost no information about these beers or this brewery online, and I really dig an adventure. Unfortunately I didn't get to go skiing on this one, like some people, but I am fortunate to somehow be a part of the experience.

Antares calls itself the Southernmost Premium Brewery World Wide, partly based on geographic location and partly on its beer reputation as they've been around since 1998. They talk about tradition and quality and craft and independence as they strive "to make a global beer brand." OK. That's enough talk, and remember, this is a series. I don't want to tell you everything today. So let's get to drinking one of these beers!

My first two choices to review are the Kölsch and the Porter. The other three are just a twinkle in my eye right now, assuming the Brickell Bandit isn't caught. I chose to drink the Kölsch first. No particular reason, just a coin flip. And I even broke out a doily for the pictures of this review! 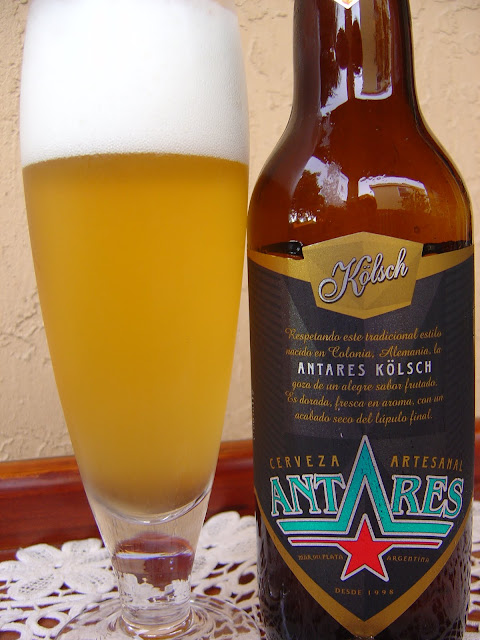 Nice presentation in a 660mL bottle with a shiny, durable, colorful label.  Now let me try to decipher some of this Spanish stuff. Looks like I can grab this at 18 years old in Argentina. The place for notching the "Drink By Date" is pristine and not notched. Besides that, something about using the best ingredients and a little story. Those of you with Spanish Superpowers can read it below.

Fluffy white head. Grain aroma, lightly sweet. Delicate light flavors start things off. A barely sweet malty toast is the first flavor that grabs my attention. Some grain is also noticeable along with a very subtle apple flavor. The initial sweetness turns lightly bitter as some hoppy and spicy characteristics take over. Even a little flowery toward the end. Crisp and refreshing with a nicely bitter finish. Great carbonation. The 5.0% alcohol is not a factor. Simple and flavorful. Very nice beer that I would easily drink over and over. Have some on your next trip South! 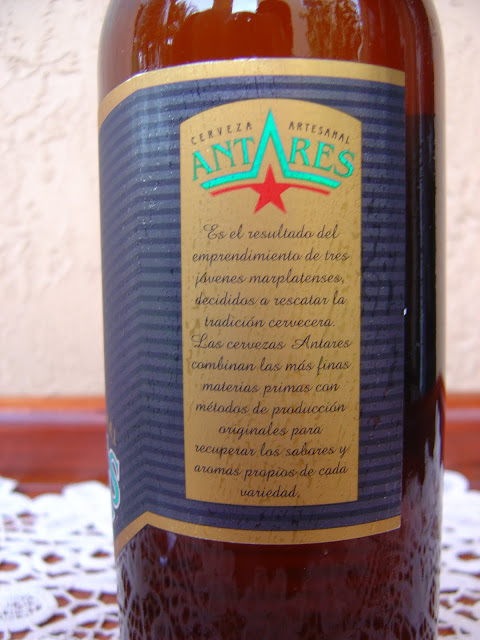 Next Up... Antares Part 2: The Beers (and I'll probably drink that Porter too!)
Posted by Beer Drinker Rob at 8:25 AM

Kolsch? Nice. I need to make friends with some Argentinian ladies, apparently.

Gee, security assholes at Brickell....color me not at all surprised.

I have an extra bottle of the barleywine - it's aged probably 3 years, but at 10% it's not going anywhere. Wanna try it?

For sure, pick your friends wisely. Funniest part is I've never actually met her in person.

About the security, Ofelia reviewed the security tapes too and found one section where the camera was turned to the wall. Can you believe that?

I think her mom is going to bring the Barley Wine, Imperial Stout and Scotch Ale when she visits in October. Maybe then we can do a Barley Wine vertical tasting.

I think that the Imperial Stout doesn't come in a bottle... Only draft... The others are Wee Heavy, Barley Wine and I don't remember the other... Hey! Maybe I can ask my friend to especially bottle one for you~ *Don't hold your breath, though*

BTW, I didn't *haha* at the Krabby Patty reference since I can't stand Sponge Bob. Next time, try something shoe related :-P

Hi Ofelia. Yeah, I just zoomed in on your original pic, after re-reading all of your tweets for the past two weeks. Ugh. LOL.

Wee Heavy and Scotch Ale and Barley Wine. I'm interested to see the difference between the first two, as they are often synonymous, yet they are clearly different to Antares.

Oh, if you can get Dario to bottle that Imperial Stout, that would be awesome! He'll do it. I can feel it!

Shoes, huh? OK, now I know a weakness. Threaten the shoes! The one other joke I threw into the post was the Bob Marley Mr. Brown video, again since I got no initial reaction (and it's a crazy, trippy song).

It is indeed a nice place to go drinking special beer. Nice from Ofelia and the blogger to let "the world" know about it. Mendoza has other brewery called Jerome that you may want to check. There are other people brewing, too. I don´t have their names in my head right now.

Thanks for commenting. One day I'll make it to Mendoza and visit all the awesome places. Glad to hear that there is some brewing happening there.