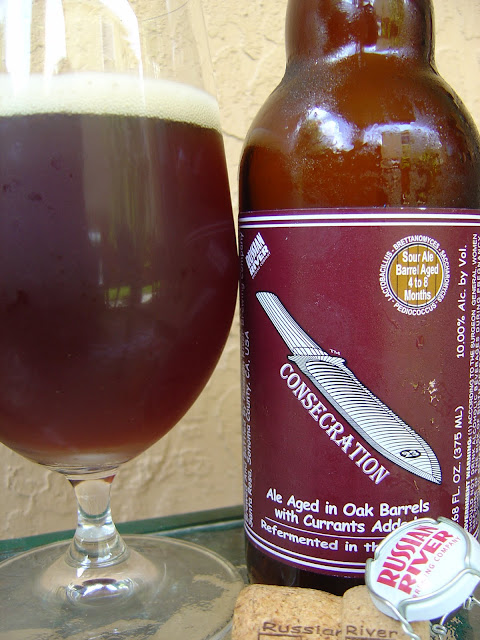 Today I'm drinking Consecration brewed by Russian River Brewing Company in Santa Rosa, California. This is a sour ale aged in Cabernet Sauvignon oak barrels for 4 to 8 months with currants added. I'm starting to notice that this "23" on the label is some kind of theme, though I don't yet know what it's in reference to. Until then, I will call the item on the front of this label Michael Jordan's letter opener. This bottle is a half wine bottle, 375mL, 12.68oz.

On the back label is the definition of Consecration followed by a story about this beer. Apparently it was inspired from a beer that Russian River made for Toronado's 20th Anniversary, but with a few twists. Batch 005X1E.

Tart cherry and currant aroma with an acidic sour grape and wine-like complexity. Very sour cherry and cranberry flavors punch you in the face, first sip. Quite tart, inviting a pucker, though you will eventually grow into it. Tannic red wine, vinegar, quite acidic. The fruits remain the stars the whole way, perfectly accentuated by all the sourness. Crisp, nice carbonation, dry finish. The 10.00% alcohol should be noted here, though I can't say it was obvious in any way. Definitely an acquired taste that I love! Took a long time to drink this beer; apparently I was really savoring each sip! Great beer! Can't wait for another bottle. 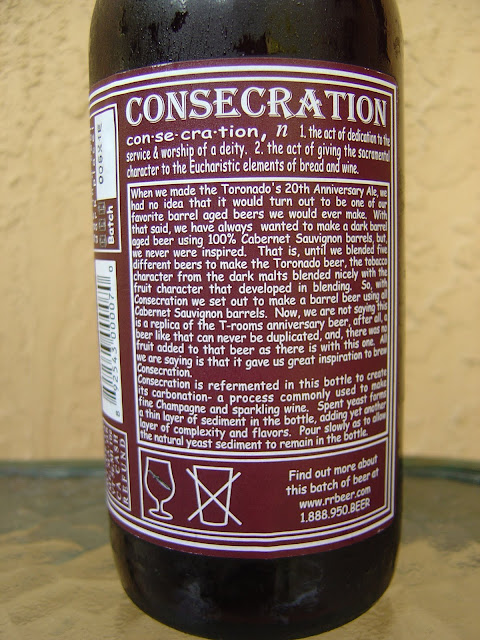 Thanks to Ed for bringing it back from his California trip. The exchange middle man in Total Wine's Pembroke Pines store keeps asking me about the ones he brought back: 3 for 3, batted 1000!

23 Minutes In Hell: One Man's Story About What He Saw, Heard, and Felt in that Place of Torment

Posted by Beer Drinker Rob at 6:00 AM