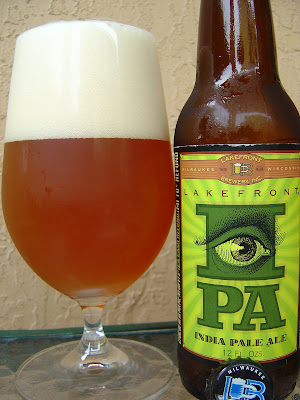 Today I'm drinking Lakefront IPA brewed by Lakefront Brewery in Milwaukee, Wisconsin. Lakefront's beers are relatively new here to South Florida, though one of their beers has been here for years. I use the term "beer" there very lightly as I am speaking about the Sorghum and Rice Disaster called New Grist. If I had Celiac Disease, I'd certainly rather not drink beer if I were limited to New Grist. Anyway, it remains one of my most popular posts ever, even two years later. And the comments are priceless. LOL.

After several prods, I got enough courage to purchase this beer today. After all, it's a beer with normal ingredients, right? And they probably make this in the "good beer" wing of the brewery. The label is fun, though not exactly original. Eye-catching (get it) greens and yellows with an eye centered in the "I" for IPA. OK, enough nonsense. Let's check this out!

So I almost lost some of the beer on the pour. Giant fluffy head. The aroma is of tropical peaches and pineapples, yet with lemony citrus in the mix as well. Very inviting. Nicely bitter to start with hoppy lemon and pine. Tastes very fresh and offers an immediate little bite at the palate. Some sweeter fruity orange balance is present, but it lets this beer be an IPA and doesn't take away the great bitterness. A little bit of spice comes before a dry finish. Some alcohol is noticeable on the finish but mostly it's masked, and you are left with a nice lingering aftertaste. Carbonation and body are great, very refreshing. And the opposite of their other beer I had. This was excellent!

FPVBGPSUHJ38
Posted by Beer Drinker Rob at 9:09 AM