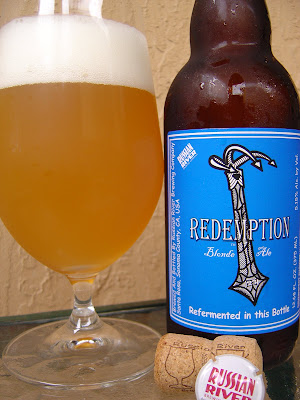 Today I'm drinking Redemption Blonde Ale brewed by Russian River Brewing Company in Santa Rosa, California. This is the second of three that Ed Roberts brought home for me from his California trip, after the awesome Blind Pig IPA I had a few days ago. This little dandy comes in a corked dessert wine bottle, 375mL, 12.68 oz. The label is a deep blue and depicts what at first glance appears to be Michael Jordan's tie, with the 23 monogrammed in it and all. I asked on Twitter five minutes ago what that thing really is, and if someone tells me, I'll make them famous here. LOL. (Update: no one gave me a definitive answer).

The story on the back goes on to define Redemption as the act of delivering from sin or saving from evil, and they further call this the sister beer to Damnation. I guess one of these beers wasn't hugged enough by mommy, or something like that. Read the rest of the story in the picture below. It's interesting. Batch 010.

Belgian yeast aroma with fruity apple and pear. Very nice. Light fruity apple flavors are the most prominent initial flavor. You will certainly not miss a good dose of Brettanomyces eagerly on its tail, but not anywhere near a funky level. Some light bitterness comes in the form of lemon and citrus but mostly this is a perfectly balanced beer. A small spicy prickliness comes along toward the end before you finish with a yeasty, fruity dryness. Perhaps the 5.15% alcohol had something to do with that, but it was really not noticeable. 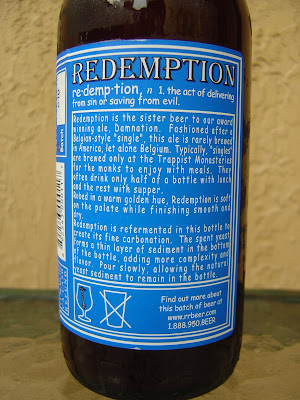 The soft flavors are appreciated and welcome. This is a refreshing and easy to drink, uncomplicated beer. I don't know the exact price, since I paid Ed back for all three beers he brought in an unitemized way, but my guess is that this beer is on the pricey side of things. It's basically the same volume as your standard 12 and remember, I was paying the price that it cost on site at the brewery, not retail. However, once in a while, grab one!

Posted by Beer Drinker Rob at 6:45 AM