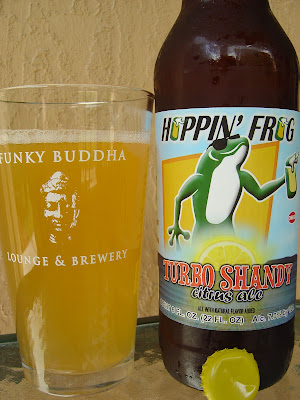 Today I'm drinking Turbo Shandy Citrus Ale brewed by Hoppin' Frog Brewing Company in Akron, Ohio. This brewery sends some of their beers here, but I've been hesitant to buy most because of the high price tag. This one today was $5 or $6 for Big 22, around half the price of the others or even less, so I grabbed it. The label sports a frog chillin' in the sun and drinking a pint of something. I'm thinking he may be wearing the shades to ward off the glow from the lemon in front of him. There is a little shandy story on the side, which you can read below.

Now this beer pours a very murky, dark orange-yellow color, and it appears to be thick, a little like an orange-ade. For sure one of the more unattractive beers I've seen. Lemon citrus aroma, not too powerful. A tart lemon flavor is what you will notice first, very lemony but not shockingly sour. That balance can be attributed to some sweet malty flavors. In fact, by the end of big 22, I'd go all the way out on the limb to say this beer is sweeter more than anything else. A little sugary, still lemony, heck, this tastes like Sprite. Of course the main difference is the 7.0% alcohol, which is noticeable and offers a little burn.

Between the tartness and alcohol and a decent amount of carbonation, there is a bit of zing in this drink. I'd have liked more tart and less sugary sweetness, which took away from the refreshment and drinkability, but it wasn't a bad afternoon opener. Dry finish and more citrus for an aftertaste. Check it out! 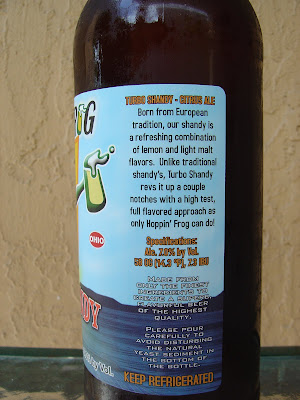 Doesn't "shandy" mean "able to drink all day" in some foreign language?

Yeah, i'd have liked it at half the alcohol and half the sweetness. Wasn't bad though.

On one hand, these are delicious fruits offering a wide variety of delightful flavors that can be savored fresh, juiced and cooked. citrus juicer