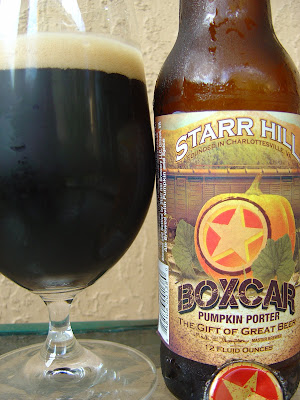 Today I'm drinking Boxcar Pumpkin Porter brewed by Starr Hill Brewery in Crozet, Virginia. Looks like someone carved the pumpkin on the label with the brewery star logo--pretty solid knife skills! I've reviewed a few pumpkin beers this year, but in all honesty, this is one of my least favorite styles of beer. Leave it to Ed Roberts to pretty much make me buy this beer under the premise that it's different because it's a porter. Guilt! Purchase before January, 2012.

Chocolate, roasted nutty aroma, rich but with zero hint of pumpkin and only a light nutmeg spice. I was expecting way more pumpkin and spice but I'm pretty pleased not to be overwhelmed. Nice and inviting.

Hello. Very thin body, extremely hard not to notice and remark about that first thing. Some nutty flavors come next but they sit side-by-side with an equally noticeable stale coffee flavor. The beer lacks carbonation, tastes flat, not flattering. A little roasted malt and the faintest nutmeg and cinnamon finish off the flavor profile.

I don't know what's up with this beer. Not the faintest sighting of any pumpkin. Seriously, Ed. Should I assume you are punking me with some prank, that you put some other beer in the bottle you then taunted me into buying? Very clever! But I'm not going to fall for it. Seriously, this tastes like a thin and flat average-tasting porter. I drank the entire bottle but I wont drink it again. Wasn't really a pumpkin anything or a porter that I'd repeat. The end.