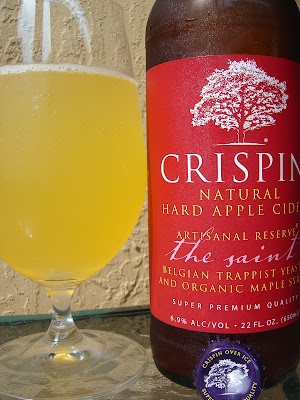 Today I'm drinking Crispin Artisanal Reserve: The Saint, a "Super Premium Quality" hard apple cider made by Crispin Cider Company in Minneapolis, Minnesota and Colfax, California. It appears that they just started making this particular cider a few months ago. You can read the press release here. (One suggestion to Crispin is to NOT use white lettering on a dark background. It makes for impossible painful reading.) The Saint uses Belgian Trappist yeasts and Organic Maple Syrup to enhance the final product.


On the side is an entire section titled Elevated Over Ice, which refers to Crispin suggesting how you might serve this cider. From beer geek perspective, I'd rather die not dilute my drink. But I do understand that adding water to drinks can sometimes bring out different flavors and nuances. For example, we did it in the Whiskey Class I took at Total Wine. That, however, was more to take the edge and heat off the high alcohol offerings. Anyway, I didn't try the water deal with this cider and stuck to my beer guns! 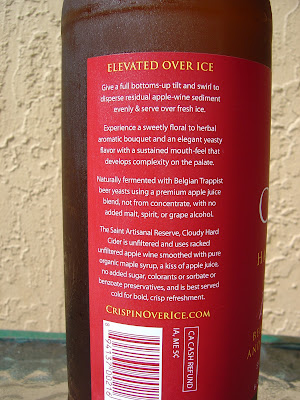 So how did I come to review a cider on my beer blog? Well, not a bad question, though I've reviewed a range from Publix Spring Water to Four Loko before, so it can't be a complete shock. Total Wine had a few Cider classes at its far-away stores near Jupiter last week. Beer leader Ed Roberts made the trek up there to participate, and man did he ever participate. It was like college all over again, except this time around I had email and Twitter and didn't need to be in the physical classroom to learn. Ed Tweeted like Twitter was about to be banned the next day! I'm surprised they didn't shut him down for hitting hourly and daily limits. But it was really informative for a guy that doesn't really know too much about apple cider, particularly quality apple cider. (PS. That guy is me!)

After the classes were over, Ed scored me two bottles of ciders available but not picked up by local distributor Gold Coast. That is crazy considering how much Wacko I saw one of their dudes stocking today. Wacko sucks and I was "this close" to saying something. I just stuck my foot out on him instead! (You realize this is what I would have done if I didn't have the kids with me at the liquor store, right?) Anyway, Ed delivered the bottles to me a few days ago and delivered another cider lesson with such excitement despite the blistering Florida afternoon sun. Correct, geniuses. I didn't pay for this and have no idea the price point. Ed told me, but I wasn't really paying attention to that point, $7 maybe? 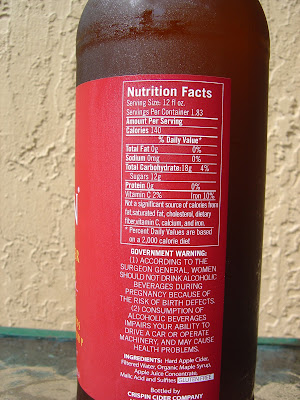 One more comment. The nutritional facts are available and printed. Not sure if that's a requirement but it's definitely different than the beer world. And this is GLUTEN FREE for all you whiny Celiacers. I already finished the entire 22 ounce bottle, so I will state now that you can just skip the New Grist and go with this, hands down!

But what does it taste like? Are you ever going to stop rambling on? Yes, thanks. Here we go! Appearance is cloudy and a hazy golden yellow. The Belgian yeast is VERY noticeable in the nose. Sweet yet tart apples are the main highlight, though just a hint of maple syrup is faintly available.

Apple cider flavors? Check! But with many twists. The first nuance to hit this apple cider was the maple syrup noted on the label. While it is quite subtle, it is still recognizable, weaving its way in and out of the picture and working well with the other flavors. That cider twang you'd expect is also there, tart and acidic, you know, with Granny Smith Apples that are juicing on the side. Basically, it's very juicy. Some interesting spiciness closes in toward the end as well.

Now, that Belgian yeast that was so prominent in the aroma seems almost an afterthought in the flavor profile. I'm not suggesting that as a knock, just rather an observation. I don't really care but was just a bit surprised. The 6.9% alcohol wasn't really much of a factor, though you certainly will know that this is hard cider, no doubt about it. Nice texture, good carbonation. I would certainly drink it again. Check it out and let me know what you think. I'd love a little perspective since I haven't tried many ciders.

I loved this one.

But as a note, Wacko (assuming you mean Magic Hat) isn't distributed by Gold Coast so I find it strange a rep for them was stocking it.

Haha. Well I suppose it's good I didn't trip that guy then. Not sure why I assumed he was from Gold Coast. I didn't see his uniform badge though, so I guess he wasn't. But it was Wacko.

I don't know if I ever told you, but I was asked to help judge the Cider category at MASH's last Coconut Cup. Was horribly out of my element - not real confident about what I was supposed to be looking for/deducting points for!

Haha, no I didn't know that. Tough to be the judge when you're a rookie. That's the way I feel about reviewing these too. I don't feel like I have a lot of authority but have nothing to lose either. Just writing stuff down. LOL