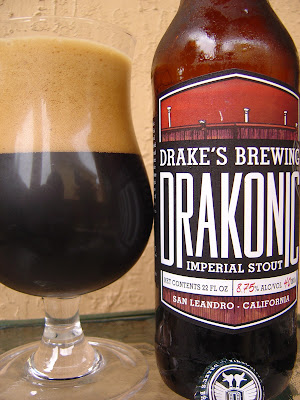 Today I'm drinking Drakonic Imperial Stout brewed by Drake's Brewing Company in San Leandro, California. This is the first beer I've tried from this brewery, and this bottle was sent to me by the famous SFGirl Melanie. The story on the side lets you know that these guys have been around a while, since 1989, and this "big malty beast of a beer exemplifies the way [they] roll [there] at Drake's." The cap and label also show some drakes, pairs of ducks, back to back. Not sure if that's how they named themselves but at least they are running with the theme. 40 IBUs. 8.75% alcohol.

Big head. Rich milk chocolate aroma with light coffee and roasted malt behind it. The initial flavors are chocolaty too with some toffee in the mix. The alcohol wastes no time introducing itself as a hefty player in this beer. At first it really thins out the sweet malty chocolate then immediately makes some vanilla and licorice complexities stand up and come out.

You know what else is really different about this imperial stout? It is pretty damn hoppy! Yeah there is a ton of chocolate and sweet malts, but between the coffee and roasted malty flavors and big hoppiness, this beer more than leans bitter. Balance is good, though I'd have preferred closer to neutral or even a little sweetness left behind. 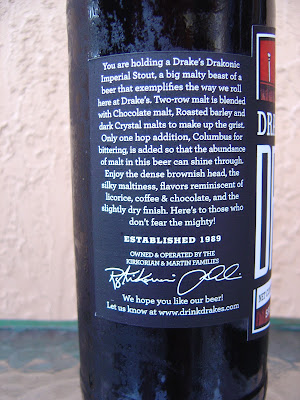 The alcohol was also a bit hot and heavy handed. I wish it were incorporated better. Hot and hoppy isn't the ideal description for an imperial stout, at least the ones I dream about every night. There are certainly good flavors in this beer, but I have a few issues with the overall delivery. I am going to finish all of Big 22 but there are many better in the style.