Today I'm drinking Green Flash Double Stout Black Ale brewed by Green Flash Brewing Company in Vista, California. This is the first beer I received in a trade with Twitter friend SFGirl Melanie. She picked some California beers that are not available down here for me and I sent her a handful as well. In fact, my shipment may have just survived a train crash--talk about great packing. LOL. A little more on that at the bottom.

Now, the only other beer I've had from Green Flash was their Le Freak Ale, which I thought was spectacular a little over a year ago. The Cooking Asshole also did a guest review of Green Flash Imperial IPA and made some new friends along the way.

The bottle is very heavy for a 12 ouncer, and it's very cool that Green Flash and their logo is stamped into the glass on the front and back. The label, on the other hand, is really basic and boring. It depicts a thumbnail sized tropical scene with the Green Flash Sunburst rising on the horizon. It also says, "Big, Bold & Complex".

Great aroma. Rich cocoa with vanilla and black cherries adding more interest. Chocolaty flavors deliver some awesomeness to the start. The beer is not as sweet as I had anticipated due to a nice dose of roasted malt and bittering coffee. Some vanilla hints are obvious and you will not mistake the warmth from the 8.8% alcohol. It is quite the flavor enhancer as well. Not sweet and not bitter, rather both at the same time. Toward the end, you might also start to taste some smoke and burnt nuances.

Medium carbonation is good. Medium to medium-well body also great. A little more alcohol and heat come at the end and offer a low-grade burning feeling. Really nice and flavorful beer. Check it out for sure! Thanks, Melanie.


So this Beer Trade may have just survived a Train Crash. All was OK from Florida to the San Francisco 'burbs. That's when this "Exception" came online. Melanie said she heard about a train crash, but we were unable to confirm this had anything to do with it. But it does make the story better, right? 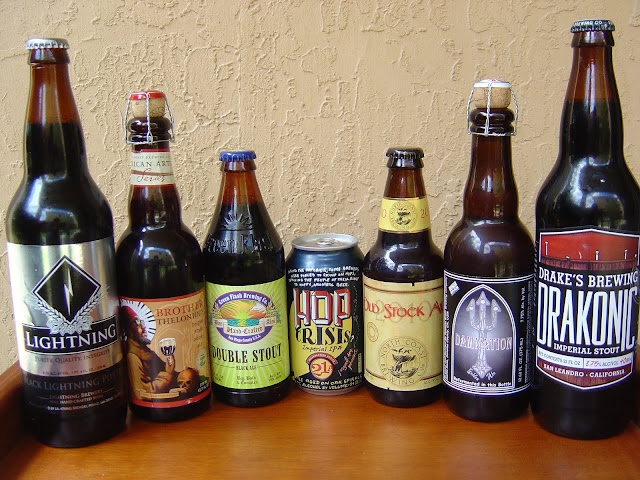 I once had a package (not beer) have the exception actually say "Train Derailment." Luckily it got to me on time and in one piece.

That's funny. I had never had any delays until this one. Didn't know what it was about. I was also glad for the safe arrival.

Finally you have one from drakes brewing. When you have another trade i recommended 1500 dry hopped drakes brewing, its awesome. That drakonic was aged for three monts and waiting to my birthday sept 29... Regards and Enjoy!

Yeah, I have a Drake's beer. No sooner did you ask about it a few days ago then I got one. Purely coincidental, I had no control over the traded beers.