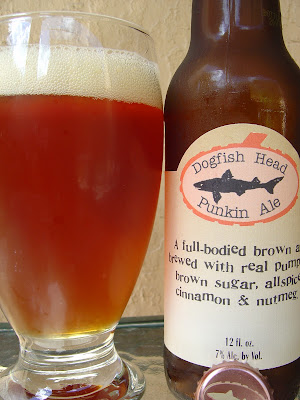 Today I'm drinking Punkin Ale brewed by Dogfish Head Craft Brewery in Milton, Delaware. The brewery recently released it's original piece of artwork to go with this beer, done by Dave Plunkert. Label is simple and says "Punk" on the neck. Bottled in 2011.

Malty aroma with nutmeg. Brown sugar flavors dominate the beginning while nutmeg and cinnamon come in on the next wave. Not lost is a good dose of hoppy bitterness, accentuated by a spirits-like 7% alcohol. The Great Pumpkin didn't really show up to the Charlie Brown special again, not a very noticeable component. Spicy toward the end. Carbonation is high and fine.

So this was good, one of the better pumpkin beers available, though perhaps I didn't really appreciate the alcohol standing out so much. I was thinking out loud to myself and if you can keep this quiet, I'll let you in on a little secret. I think that breweries should stop brewing pumpkin beers altogether. Starting now. It seems that because a few make them, all feel the need. Certainly there are better Fall Seasonal options. No one really enjoys them and most people could easily go three or four or more seasons without drinking any. Anyway, I'm sure you'll tell me why I am wrong. I'd expect nothing less. Next year, no more pumpkin beers unless there is something really compelling and new. Mkay?

Posted by Beer Drinker Rob at 9:14 AM

I'm not a huge fan of them either. Geez, looking at that picture, and from my own experience the last year or so, I could swear Punkin' used to be a darker beer around 2005-2007, basically a brown ale. I used to love this beer back then, now I can take it or leave it.

It seems that a lot of the beer geeks are not so crazy about pumpkin beers....but the more casual beer drinkers love them and look forward to their release every year.

I have a CCB Good Gourd on deck to try, never had that one before..

I guess you're right. I've already had a few similar conversations where I've been told how wrong I am. That I'm 100% incorrect and everyone loves Pumpkin beers and can't wait for them to come each year.

Oh well, I'll be sure to leave them my share next year. I did hear Good Gourd is pretty nice, though never tried myself.

You are wrong. You are perfectly welcome to not like pumpkin beers, and I won't try to change your mind. But everyone (ok, obviously not 100% of people) loves them. I know plenty of beer geeks that love them. Well, I should also qualify that people who love pumpkin beers love GOOD pumpkin beers. I agree with Patrick saying that it seems everyone makes them just because a few do. That is very true, and very sad. Because it just dilutes the style of pumpkin beer.

Haha, Pamela. I already knew your comment. That's why I baited you to leave one.

You know I am rooted in hyperbole though I of course agree with my basic premise.

BTW, you are agreeing with me, not Patrick, when you agree to the comment about everyone being a copycat pumpkin diluter brewer. LOL.

See you around the block. <3 xxoo

Good gourd is really good. Had it at their taproom. Gotta agree about Punkinnot having a strong pumpkin flavor. It seems like the spices drown it out

Yeah, that's fine, I can agree with you both - just responding to comments.
In the end... I don't think Punkin is amazing, but I'm a brown ale fan and a pumpkin fan and I enjoy this rare brew. But, Pumking is the true champion. If we're keeping score. Nevr tried the Good Gourd though, perhaps I need to get on that.

Pumking, I did enjoy for what it was. But you know how much I don't care about Pumpkin beers? I looked eye-to-eye with CCB Good Gourd yesterday at Total Wine and wasn't even slightly inclined to buy it.

Right on. Generally, pumpkin beers are meh at best and nasty at worst...especially those who insist on overwhelming you with pumpkin pie spices. Other than New Belgium's Kick, I think I too will pass on this year's offerings of gourd in a bottle.