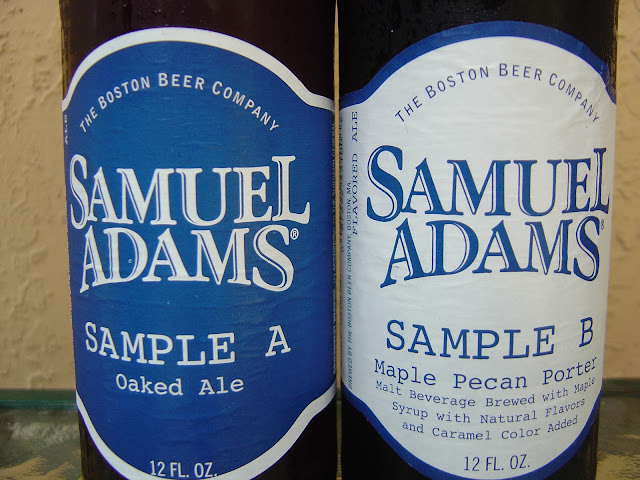 Today I'm taking the Samuel Adams 2011 Beer Lover's Choice challenge being run by The Boston Beer Company. Last year I did the same and chose the American Rye Ale, the beer that eventually won and was named Revolutionary Rye Ale. I guess one of the fringe benefits of having a beer blog is that I have some connections (Ed Roberts) that are willing to nag the Sam Adams representatives in the area until they provide a few real-sized samples for this contest each year. By real-sized, I mean that I got an entire bottle of each and didn't just try a shot at a local bar tasting. But it's for science and it's for you. So here is a review for each and where I tell you which I like best and why, along with my recommendation to Sam Adams for which beer they should brew next year (assuming they weigh other factors besides straight vote). 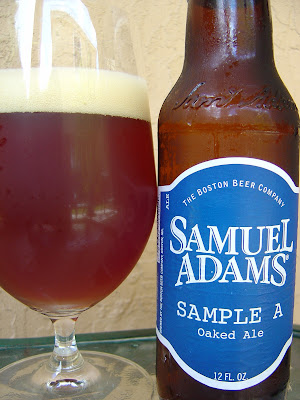 I started with Sample A, Oaked Ale. I'm pretty sure the Sam creative department worked overtime on that name. LOL. Looks like they might want to have their regular label and neck label machine aligned a bit better for the real show too. That's it for the label, as they are samples and identified as such. Enjoy before December, 2011.

Sweet malty caramel and honey aroma with plenty of oak as well. Caramel flavors stand out in the beginning, sweet and chewy. Accompanying them are raisins, plums and cherries. Oh, and a strong dose of oak. The alcohol is noticeable and really comes on with a rum-like character, perhaps because of the way it interacts with the dark fruits noted above. The alcohol also accentuates the oak and does a decent job cutting the initial thick consistency. Hints of vanilla and some black pepper spiciness come through toward the end and linger into the aftertaste.

This beer was pretty good. It definitely took a little getting used to. It was a little too sweet and the alcohol was a bit more prominent than I'd have preferred. Oak is noticeable but not a dominant turn-off as in many other beers. My opinion is that this will be a hard sell for Samuel Adams and that many of their core fans and tons of potential fans may hate it. 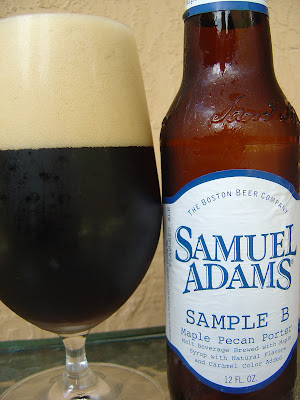 Next up. Sample B, Maple Pecan Porter. The label notes this is a malt beverage brewed with maple syrup with natural flavors and caramel color added. Also an "Enjoy before December, 2011" beer.

Big head. Now no one likes head more than I do, but I almost lost it on this one. Huge maple syrup aroma--sweet, rich, inviting. I've been to those places where they make maple syrup off in the woods right next to the tap in the maple tree, and it smelled like being there.

Maple syrup and brown sugar flavors are prominent at the beginning. They are sweet but tamed by some roasted and nutty malts, a little hop bitterness and a touch of coffee as well. The body is a little thinner than I had anticipated but only because the aroma was so rich and full. A solid medium body is just fine. Carbonation is also medium, perfect. By the finish, the beer wasn't sweet anymore and turned very dry.

Quite a flavorful beer, balanced, a great porter. Between the two beers, this one was clearly better for me, personally. I also think that this is the beer that Boston Beer should brew as I believe it tastes more mainstream than the Oaked Ale. Don't get me wrong. I don't think this is an ordinary beer at all, just more in line with a style that more people may appreciate, with some delicious twists.

Dedication: "Thanks to Ed, Max and Rebecca. You make me whole." LOL. See you guys around! Have the brewery call me if they can use my expert opinion. As I stated yesterday (after lifting from another Twitter profile), My opinions are well thought out and should also be yours.
Posted by Beer Drinker Rob at 8:24 AM