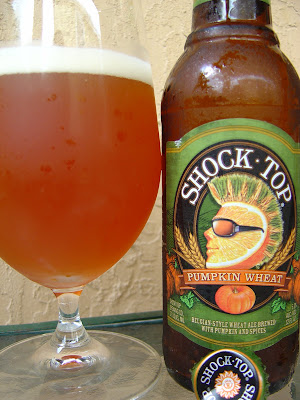 Today I'm drinking Shock Top Pumpkin Wheat brewed by Shock Top Brewing Company in St. Louis, Missouri. Yes, I know that's part of the Evil Empire, Budweiser, but let me remind you I don't care and am not a snob and will judge the beer on its merits. If you want to talk about their tactics in marketing or anything else, well, feel free. Comment moderation is OFF!

Around the neck of the label, you are told to pour most of the beer into a glass, swirl the last inch and then pour the rest to properly blend the spices and release aroma and flavor. OK. I played along. Orange slice mohawk dude for this member of their Seasonal Collection is still wearing shades, but his mohawk is alternating green and orange. There are also pumpkins beneath him. It's a pro label.

Pumpkin and spice, pretty typical of an inviting pumpkin beer. Pumpkin flavors are prominent in the beginning, but after a second, they are dominated by a large dose of cloves and nutmeg. The wheat texture is also very noticeable, thick and, um, wheaty. The pumpkin has an earthy and vegetal flavor that is always present. Carbonation is high and a bit harsh, like the "not so good" champagne you skimped on during last New Year's Eve, prickly in the throat. Overall, not a bad beer. The spices were just a little dominant, though not nearly as ridiculous as some others this pumpkin season. And the carbonation could be toned down. 5.2% alcohol is not a factor unless you drink a lot of them. And you'll like the price, but Bud's shareholders will still be getting rich, so get used to that. I have.