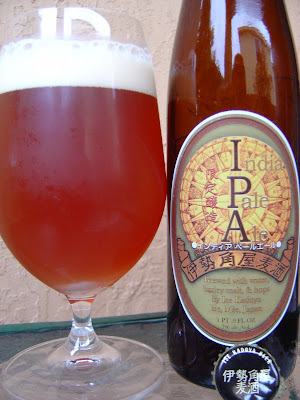 Today I'm drinking Ise Kadoya IPA brewed by Ise Kadoya Microbrewery in Ise, Mie, Japan. When I bought this beer, I mistakenly thought it was also a member of the Baird Brewery buy I made. At least I got the right country. Those tricky Shelton Brothers!

Anyway, the bottle is tall and sleek. The label has a bright gold star burst on the front and some hard-to-read writing as well. Some is hard to read because it's in Japanese. The rest is difficult because it's some small block maroon color on an olive background--camouflaged.

The story on the back offers a little more information. Apparently, Ise Kadoya has been making soy sauce and miso for forever, and now they are getting into the craft beer game. Best of luck to them. This was an expensive 16.9 oz. bottle, so I expect a lot for my $8.

Interesting tropical fruity aroma. Orange and tea and caramel and sweetness, pretty nice to smell. Quite sweet to start, flavor-wise. Caramel and tropical sweet orange and pineapple. But there is some balance provided by a nice spicy and black pepper bite behind that initial sweetness. Some hoppy citrus is also evident.

Now your 7% alcohol certainly adds a kick and some heat! It really also helps bring out some tea and buttered bread and oak flavors toward the end as well. Go figure, I just joined the tea party.

I find this beer to be a little much--too sweet. More of a DIPA. And though the alcohol isn't there percentage-wise, it certainly tastes like a 10% double! Nice carbonation, good body. Was flavorful but the sweetness made drinking it less enjoyable. I wasn't overly impressed, especially not for the hefty price tag. Stick with your local favorite!

Posted by Beer Drinker Rob at 9:05 AM