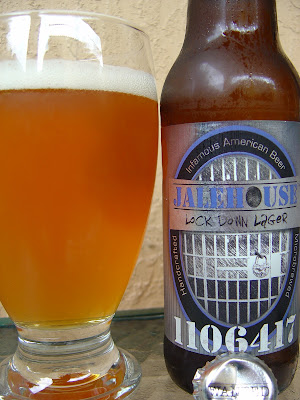 Today I'm drinking Jalehouse Lock Down Lager brewed by Florida Beer Company in Melbourne, Florida. Seems like this might be a contract beer as Jalehouse has its own website listed. There's probably a reason, but I'm going to crack the obvious joke anyway. Nice spelling!

The label shows a cell on the front and calls this an "Infamous American Beer". I had never heard of it or the brewery until a few weeks ago when this and its Light brother showed up on the Total Wine shelves. The ingredients are listed on the side as well as some stats: OG 10.1P IBU 23 SRM 9.8 ABV 4.6%. That OG doesn't stand for Original Gangsta!

Pretty weak aroma of lemon and grass. Lemon and citrus flavors pop at the beginning, though. Nice prickly carbonation, too. Toasted grain and earthy flavors end up losing to the lemon component and landing this beer on the lightly bitter side of balanced. Pretty refreshing all around and an easy drinker. The aftertaste is a little strange and lightly medicinal though. Light body made me wonder how light their "Light" version of this beer can be. I probably won't check that one out so let me know if you do.